Nic Stoltzfus (S. Nicholas Stoltzfus) is a 10th-generation descendant of Nicholas Stoltzfus, one of the best-known figures in Amish and Anabaptist history. Nic is also the author of a book released last year on his ancestor’s family: German Lutherans to Pennsylvania Amish: The Stoltzfus Family Story. 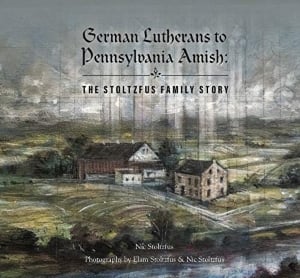 The Stoltzfus surname is one that most who know the Amish are well-acquainted with, as it is the most common Amish surname in Lancaster County, and found in many other Amish places as well. But beyond the Amish, Nicholas Stoltzfus has an estimated one million-plus descendants alive today, meaning that his legacy reaches well beyond Plain circles.

Nic had the help of a few others in this work, mentioned below. Here is the book description, via publisher Masthof:

German Lutherans to Pennsylvania Amish: The Stoltzfus Family Story tells the story of six generations of the Stoltzfus family spanning over 200 years (1624-1832) as they find a path forward from one faith to another, through many different countries and cultures, during times of war and peace, and through love and loss. With over 150 images and original research, the book paints a fuller picture of the Stoltzfus family and how their decisions impacted the lives of their descendants even up to the present day. Also included is a history of the Nicholas Stoltzfus Homestead and how modern-day descendants saved the house from destruction and restored it.

Nic has kindly answered some questions for us today about the Stoltzfus story and this book. He is also offering two autographed copies of the book to Amish America readers in a giveaway, along with a bookmark.

How to Enter the 2-Book Giveaway

To enter for a chance to win a copy of the book, simply leave a comment on this post. I’ll draw a winner at random and announce it here next week.

Amish America: Who was Nicholas Stoltzfus and why is he important?

Nic Stoltzfus: Nicholas Stoltzfus immigrated to Pennsylvania with his family in 1766 from Zweibrücken, Germany. He was involved with the early Amish church in America, and his son Christian was an early Amish bishop in Lancaster County. He is important because all Amish Stoltzfuses today are descended from him and his wife, Anna Elisabeth (Bachmann) Stoltzfus. 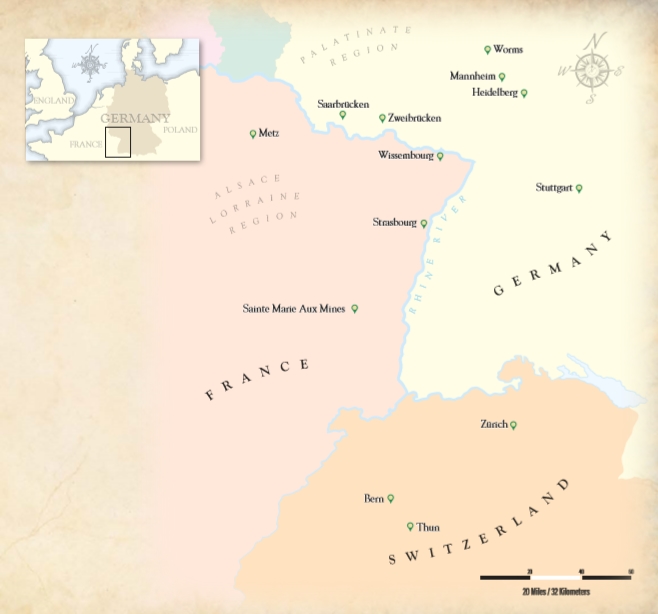 What will readers learn from this book?

In the book German Lutherans to Pennsylvania Amish: The Stoltzfus Family Story, readers will come to understand the rich heritage of the Stoltzfus family. Unlike other Amish ancestors who originated in Switzerland (Smuckers/Yoders/Beachys, etc.), the Stoltzfus line originated in eastern Germany, and our ancestors were Lutheran, not Anabaptists. This genealogy research, spanning from 1624 to 1832, makes up most of the book.

Part of the book is also concerned with the preservation of the Nicholas Stoltzfus Homestead in Reading, Pennsylvania.

How did you research this book? Who was involved?

We were really blessed to have a great team of researchers who helped with this book. The core of the European historical research took place in summer of 2018, when my Dad Elam, Zach Stoltzfus, Lucy Stoltzfus, Rose Beiler, and I went to Germany to do research in the archives there. 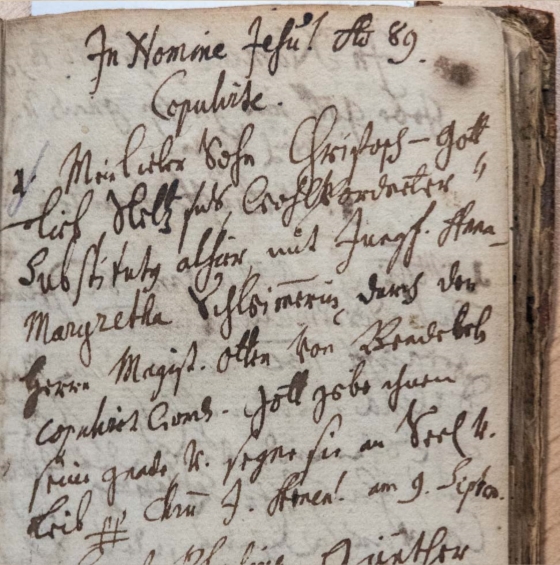 My Dad Elam is ex-Amish and has a good understanding of what it’s like to grow up in that culture. Zach Stoltzfus is currently working on his PhD in History from Florida State University, and his wife Lucy has her PhD in the field of Musicology. All four of us took our cues off of Dr. Rose Beiler, who is a history professor at the University of Central Florida and who knows how to read the old German handwriting from the 1600s/1700s.

What are some interesting or surprising things you uncovered while researching and writing this book?

Our trip to Germany was really fruitful! By being able to read the archival information, Dr. Beiler was able to better understand the context of what life was like for our ancestors in Germany. She found small details about Nicholas—such as who he had financial dealings with, troubles with certain family members, interactions with the local religious and government officials—that really helped give us a better picture of him. Because of this, we can understand him better as a complex person with struggles and problems, just like us today.

Another big thing we discovered was the name of Nicholas’ wife. This took research both in archives in Germany and here in Pennsylvania. I wrote about this in depth in my upcoming memoir In the Footsteps of my Stoltzfus Family: A Genealogy Memoir (Masthof 2020, Forthcoming).

Which places that you visited or researched were most memorable?

Zweibrücken, Germany. Our research team had the chance to interact with the Mennonites in the area, and they were so good to us! They treated us like family, took us into their homes, fed us, and helped us uncover historical information that we wouldn’t have been able to uncover without their help. It was such a pleasant experience. 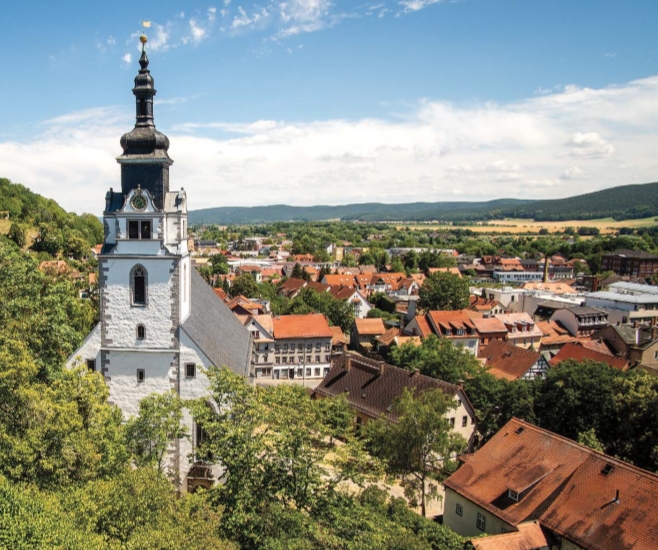 On a more personal level, it really meant a lot to me to travel with my Dad Elam to Passau. We visited this city before we began our research on the Stoltzfus book, and our reason for visiting here was to learn more about the Ausbund, which is the Amish songbook. My Dad remembers singing these songs when he was a child, and it meant so much to him to visit the castle where many of these songs were written by those imprisoned Anabaptists.

What was the transatlantic journey like in the 18th century?

Oh boy—it was rough! I think we are so spoiled today when we travel—planes, trains, boats, cars (even buggies!) are much more comfortable to travel in now compared to travel in the 18th century.

For Nicholas and his family, they would have been crammed into a wooden ship with other passengers—most of them also immigrants from Germany—and it took their ship Polly nearly three months to cross the Atlantic Ocean.

Today’s cruises offer the plenty of the world at our fingertips—all sorts of delicacies, clean water, hot showers, and private bathrooms. There would have been no such luxuries on their voyage. Cots were cramped, sometimes families had to share the same bed, the water was murky and full of bacteria, bathing was infrequent, and the food was old biscuits and other foodstuffs that preserved well without refrigeration.

What was life like for Nicholas and his family once they arrived? 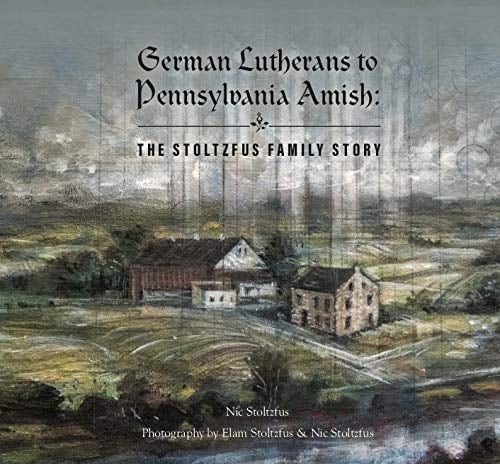 Can you tell us something about Nicholas’ children and some of his notable descendants?

Nicholas died in 1774, having lived in Pennsylvania for less than a decade. In the court records after his death, there are record of four children: Anna, Barbara, Christian, and Magdalena. Anna was married to a farmer named Christian Fohrer and they lived in the Oley Valley in Berks County (today, there is a sizeable Old Order Mennonite congregation located here).

Barbara married John Schmucker, and many of the present-day Schmuckers/Smuckers/Smokers of Lancaster County are descended from this couple. Christian—as I mentioned earlier—went on to become a bishop in Lancaster County. As for Magdalena, we have no idea what happened to her—after Nicholas’ death, records of her cease, and we haven’t been able to find anything else about her. In essence, she is lost to history. 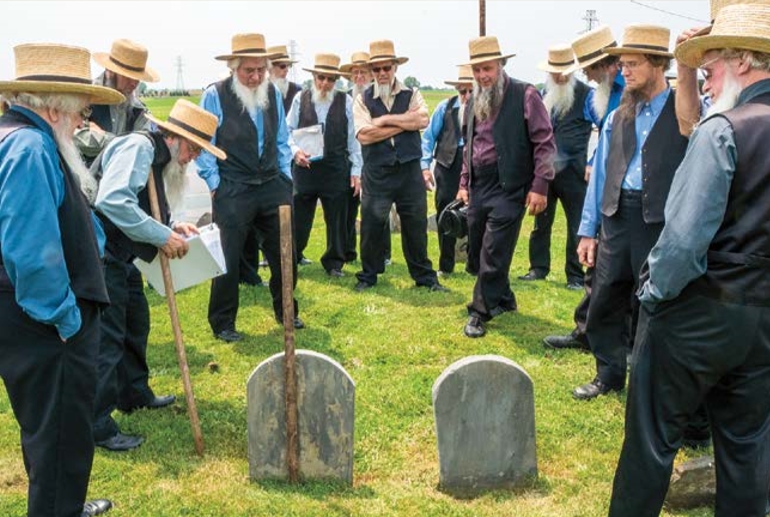 Amish historians at the graves of Christian and Elizabeth Stoltzfus. Photo by Elam Stoltzfus

It should be noted that, according to research by the Young Center for Anabaptist and Pietist Studies at Elizabethtown College, the surname “Stoltzfus” is the most common last name amongst Lancaster County Amish. Furthermore, most all Lancaster County Amish are able to trace their roots back to this one family.

As you mentioned, part of this book covers the Stoltzfus Homestead. Can you tell us more on the story of this home and site?

The Nicholas Stoltzfus Homestead was where the Stoltzfus family lived for three generations, from 1771 to 1801. The house itself dates back to the early 1700s.

By the 1990s, though, the old stone house was in BAD shape: it was dilapidated, falling down, covered in ivy, and in danger of falling apart. Thankfully, a group of dedicated descendants (mostly Old Order Amish) got together and restored the property. This effort was spearheaded by the Pequea Bruderschaft Amish Library, the Nicholas Stoltzfus Homestead Preservation Committee, the Tri-County Heritage Society, and Country Meadows Retirement Community. 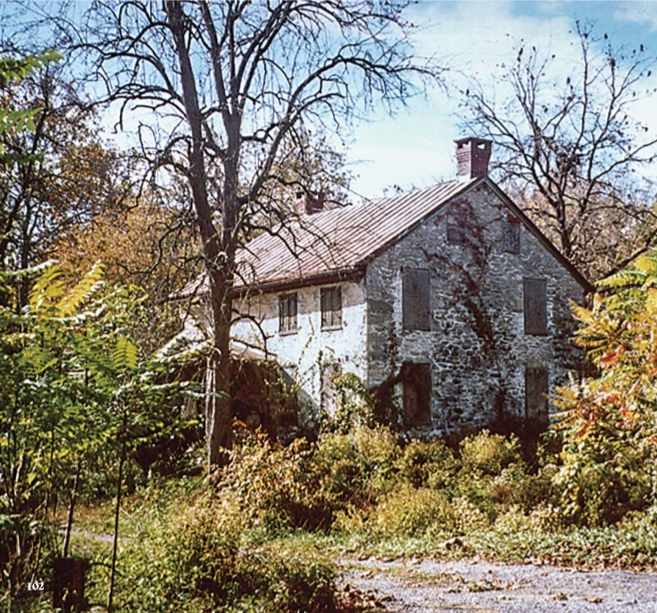 The dilapidated former home of Nicholas Stoltzfus in 1994. Photo by Sam Stoltzfus

In 2016, the Leader Family and Country Meadows donated the property to the Nicholas Stoltzfus Homestead Preservation Committee. Essentially, the Stoltzfus family now owns and manages the property.

I served as caretaker of the property from 2018 to 2020, and my parents Elam and Esther Stoltzfus came on board earlier this year to serve as caretakers. I currently serve as ambassador for the Homestead, and I am a member of the Committee as the secretary. Our committee is a 501(c)3 non-profit, and we work to preserve the Homestead as a site to share our faith heritage with others. Our largest fundraiser is our annual May benefit auction, always held the first Saturday of May. Our upcoming auction (planned for May 1st, 2021—mark your calendars!) will celebrate the 250th anniversary of Stoltzfuses at the Homestead. 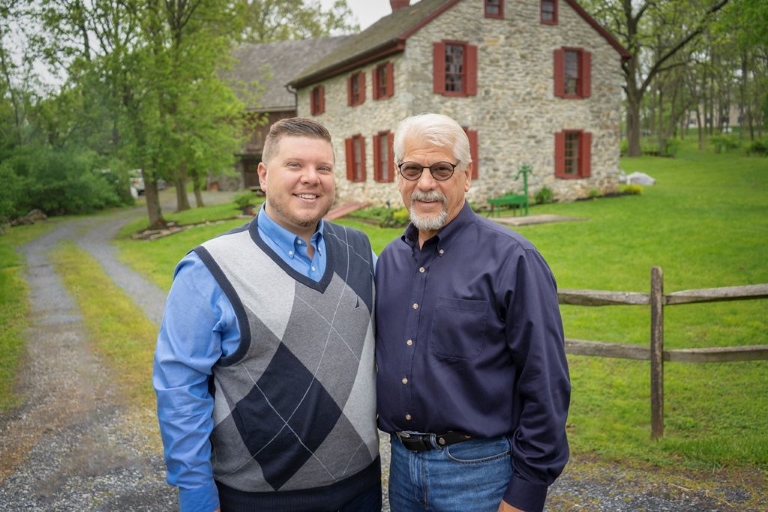 Nic and his father Elam outside the Stoltzfus House

The Homestead is open for tours-by-appointment and event rentals. For more information about the Nicholas Stoltzfus Homestead, visit our website at nicholasstoltzfus.com or check out our Facebook page!

What kind of response have you gotten from Amish and other readers?

We have gotten a positive response from the Amish and other readers. Our general readers love the pictures and maps. For the more hardcore genealogist, I also included footnotes with citations to original sources. It was a balancing act, trying to make it a book accessible for both younger readers and professional historians, but we’ve gotten positive feedback that it is a book that really works for all ages.

As far as the Amish go, the book would not have been the same without their help. In particular, I was fortunate to have the help of the Pequea Bruderschaft Amish Library, located in Gordonville. The historians involved with this group are chock full of local knowledge and they have done a good job of keeping records at the library. One of their members, Ben Riehl, also serves as vice-chairman of the Nicholas Stoltzfus Homestead Preservation Committee, and he was a big help in better understanding the life of Nicholas’ son Christian.

Where to get the book

Thanks go to Nic for this informative interview. You can find the book in several places; the preferred buying link is direct from the publisher Masthof. It is also available on Amazon

, for the same price.