One of the more remarkable interactions between Amish and civic society occurs in Lancaster County, in the form of Amish and other Plain People volunteering, at a quite high level, on local fire crews.

This article details that involvement, as well as Plain participation as Emergency Medical Technicians (EMTs).  These aren’t just a few token Plain people. One local fire and EMS company is described as 80% Amish and Mennonite. An official estimates up to 300 Plain firefighters plus a smaller number of EMTs.

Volunteering is attractive not only because you get to help others.  There is something exciting about riding in an ambulance or putting out fires, as one young Amishman describes in the piece. 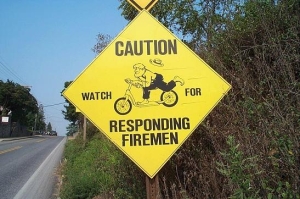 Would you be surprised if I told you not all Amish feel this type of volunteering is a good thing?

An Amish informant admits some in Plain communities are “dead against” EMS participation. The article doesn’t really elaborate as to why, though I’d suppose it has to do with involvement in civic institutions.

As far as volunteering across Amish society, Donald Kraybill shared this:

Volunteers commit to causes such as blood donation, hospice, disaster relief and participation in benefit auctions for the Ronald McDonald House at Hershey and other organizations, Kraybill said in an email.

Because the local settlement is the biggest, he added, and because many church members live in rural townships, “Amish involvement in volunteer fire companies is very extensive and, I think, higher than in most settlements.”

Volunteering makes sense for many Amish, though the form it takes may vary depending on affiliation, the individual’s age and sex, and location.

Another noteworthy point from the article: the idea that volunteerism, in general, is declining.  I’m not sure about the last couple of years, but this government site shows a general decline from 2003-2010.

I also found it interesting that the five states with the highest rates of volunteerism–Utah, Iowa, Minnesota, Nebraska, South Dakota–are Midwestern, with the exception of Utah.  Is there something cultural about the Midwest that leads to more volunteering?

Some are concerned by the decline in community service.  I have heard support for making volunteering mandatory.  Something tells me that is not the right way to go about it.  “Mandatory volunteering” seems like something else entirely.

I have volunteered in the past but must admit I currently do not. I know, of course, that it is a good thing to do, but I guess I’d offer the usual excuses: not enough time, don’t know where, erratic schedule, etc.  None of them really great, or that justifiable, if I’m being honest with myself.

What about you? Do you volunteer? Why?

If the trend is accurate, why do you think fewer people are volunteering today?