One of the few places you might find an Amish person “behind the wheel” (see below) is at the various steam engine shows taking place in Amish areas.

Today a reader shares photos from the annual event of the Northeast Indiana Steam and Gas Association, “a group of people who are interested in preserving and sharing…the engines, implements, crafts, and activities of America’s past.”

This was the 32nd edition of the show, held last week in Lagrange County.  The reader says he “was surprised how many Amish individuals were operating steam engines.” 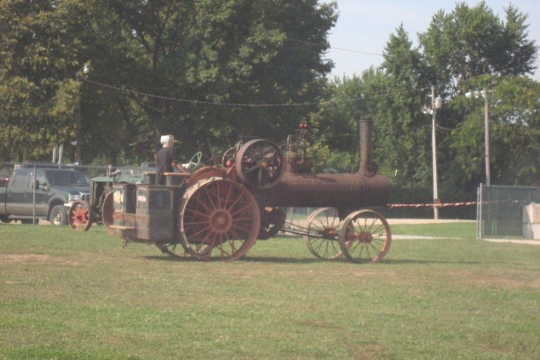 Amish have a fondness for steam engines. There are historical ties to the old technology:

By the late 1880s large steam engines operated threshing machines on many Lancaster County farms. Small gasoline engines were widely used by the turn of the twentieth century to saw wood, grind feed, pump water, and power washing machines. Like their neighbors, the Amish owned and operated steam and gasoline engines and used horses to pull machinery in their fields. (Donald Kraybill, The Riddle of Amish Culture, p. 222).

Today many Amish derive power from conventional tractor engines, though they are not often operated in fields.

Amish Use of Steam Engines

Amish continue to use steam engines in limited ways today. There is the steam engine ice cream freezer which you may have seen at Amish auctions.  This past June I learned firsthand some of the interesting ways they can be used, on a visit to an Amish friend’s organic farm.  One morning I found myself awoken abruptly by the 6 AM shriek of a steam engine whistle–piercing through the 33 decibel-rated earplugs I usually wear while sleeping as if they weren’t even there. 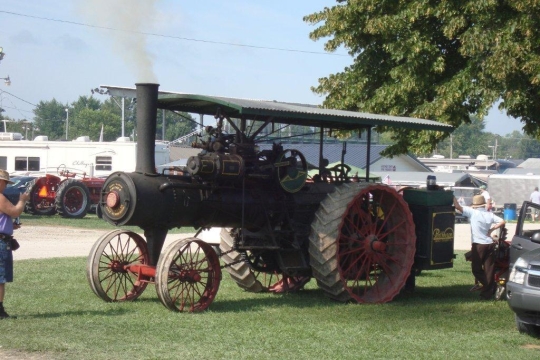 My friend happened to have a pair of steam engines on his property, and they were gearing up for work.  Surely they had a task more important than serving as an industrial-strength alarm clock?  They did: steaming the ground in order to kill weed seeds.  Their Old Order Mennonite owner-operators later told me they provide the service for around a dozen farms in the area.

The engines generate ultra-hot steam which is transferred into the rows of earth via long metal pans.  The pans get so hot, I was told, that were you to touch them, they would brand you.  This treatment apparently does the job without use of chemicals. There is a history of doing this in tobacco fields, though this farm is strictly produce.

If you’re wondering, the engines have wheels for a reason.  These machines can move, at a blistering rate of 2 or 3 miles per hour.  It would take the young men around an hour and a half to travel the 4-5 miles home.  They said they preferred traveling at night, for some reason which I didn’t quite catch.

I don’t know much about them, but I’ve often thought steam engines a little like works of art, in both their design and often vibrant paint schemes. They certainly are artifacts of the past. The ones treating my friend’s farm were around a century old. Despite their age, they were in good working order, including the three whistles of varying, but all shrill, pitch. 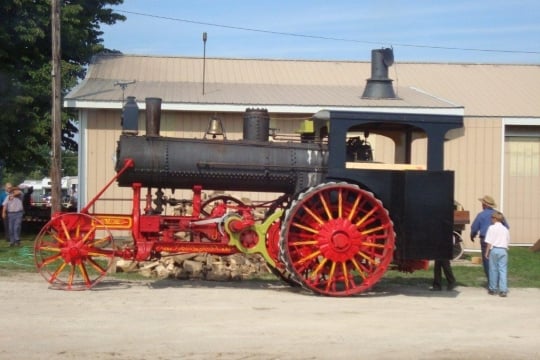 There are other steam engine events on the calendar in Amish areas.  If you’re in the Lancaster County area this week, the 65th annual Rough & Tumble Thresherman’s Reunion will be held beginning this Wednesday through Saturday (August 14-17) at Kinzers, PA.

This event, which showcases steam engines among other farm implements, is very popular among Amish. On a previous post, Paul Long shared this on the Thresherman’s Reunion:

This engine show dates back to when the newest equipment was being shown to engine men and threshers. There is a traction engine parade as well as antique tractor parade, a steam traction engine rodeo in an arena, sort of like tractor pulls doing tricks with the engines as well. Usually 15 or 20 engines and road rollers fired up at once for the week there.

We close with a few more shots from the show in Lagrange County.  Note the three whistles visible in the first pair of photos.  How many times did this young man let ‘er rip? 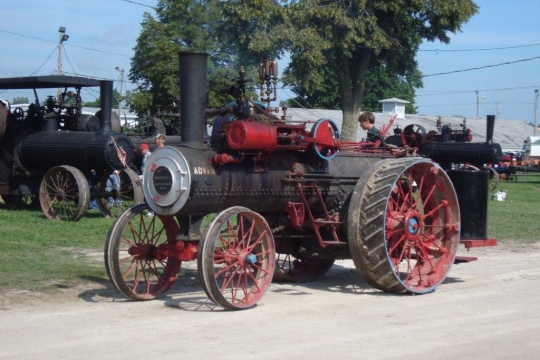 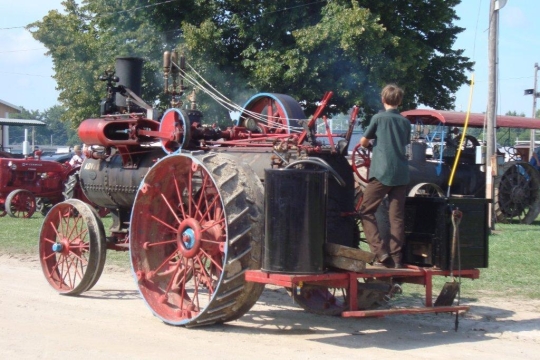 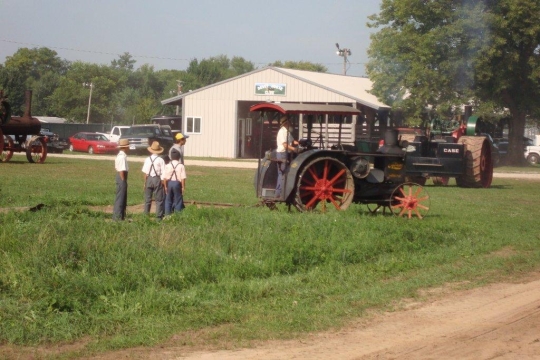 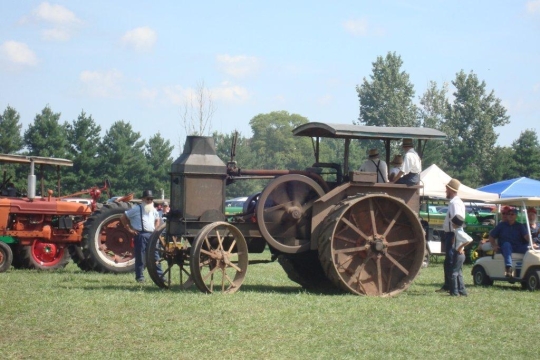 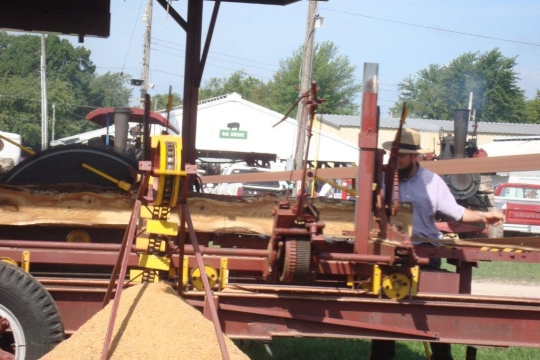