What will the next Amish TV show be about?

I say “next”, because it’s pretty much inevitable there will be more television and film on the Amish.

What I’ve seen lately suggests as much. Over the past two weeks, I’ve been contacted on five separate occasions by people interested in presenting Amish on film (in a program or documentary).

While I do hear from people wanting to film the Amish from time to time, on a single day last week three emails arrived in my inbox in the same number of hours. I’ve never worked in television, but maybe this is program planning season?

We’ve also seen the success of current shows about the Amish, suggesting the trend will continue. Besides recent hits Amish Mafia and Breaking Amish, an upcoming addition to the slate is DIY network’s Vanilla Ice Goes Amish. 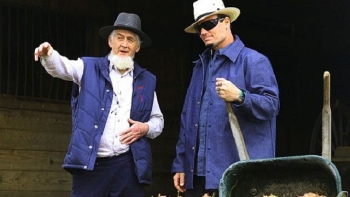 At first look this show may seem absurd, with its premise of a 1990s rapper learning craftsmanship from the Amish.

Below the surface, this one may turn out to be more wholesome, and maybe even reality-based, than some other recent shows. Here’s the star discussing filming with a construction crew in Van Wert, Ohio:

Accuracy is of course a separate question.  Whether the Amish want these programs or not is as well. Viewers want programs about the Amish, so that is what they’re apt to continue getting.

If the reaction to some shows has been negative, that doesn’t mean that television about the Amish has to be oversimplified and/or sensationalized…even though that tends to be the sort of thing that sells.

Any predictions on what future programs about the Amish might cover?