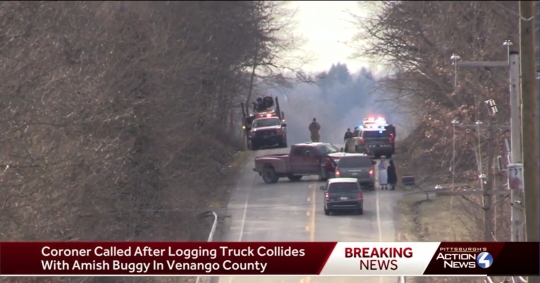 CLINTONVILLE, Pa. — One adult and one juvenile were killed after a logging truck and an Amish buggy crashed in Clintonville, Venango County, on Sunday afternoon, the Pennsylvania State Police confirmed.

According to PSP, the logging truck struck the horse-drawn buggy from behind while both were traveling eastbound in the area of 2414 Clintonville Road around 3:50 p.m.

A family of five was traveling in the buggy. A woman and a boy were found dead at the scene, while a man and girl were flown to St. Elizabeth Hospital in Youngstown, Ohio and Children’s Hospital in Pittsburgh, respectively. Their conditions are unknown at this time.

A boy was treated and released from Grove City Medical Center.

Venango County has a single Amish community of 3 church districts. Neighboring counties Crawford and Mercer are heavy with Amish settlements, but this appears to be the only one in the county.

I don’t recall ever hearing much if anything about this community, so I can’t comment conclusively on its origins or affiliation.

But going by the images of an Amish business sign, and the appearance of some Amish people in one news station’s report, it doesn’t appear to be a very plain settlement. So I would confidently guess that this buggy had an SMV triangle at the least. 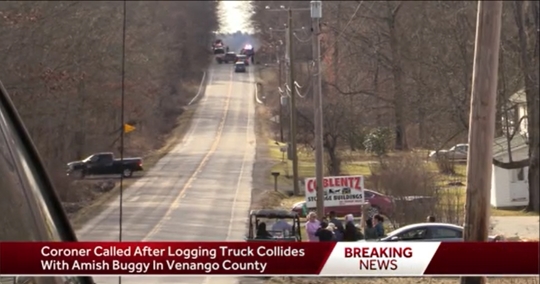 As a car driver, I find logging trucks can be quite intimidating on the road. In logging regions of the country you often encounter them on winding secondary highways.

When fully loaded with lumber these trucks travel with fearsome force. The buggy was hit from behind, perhaps indicating the driver wasn’t able to slow his load in time.

Facts are scarce though, in the available reports. The accident is under investigation. Prayers for this family that the father and daughter recover.