Do you read Amish newspapers?

Last week the Budget was covered in an article in the Wall Street Journal, not the first time the Ohio newspaper has received attention from conventional media.

The Journal’s writer explores its folksy appeal, quoting publisher Keith Rathbun, who describes the paper as “like someone talking over the back fence to a neighbor.”

Also mentioned in the WSJ piece is one competing publication, Die Botschaft, published by Amishman Elam Lapp. Die Botschaft is stricter about content allowed and sees a smaller circulation than the Budget (12,000 vs. 18,000, according to WSJ).  Like the Budget, the bulk of the content in Die Botschaft is made up of letters of regular writers.

Last February I had a chance to meet Elam one evening at his Pennsylvania home. After a late snack of cheese sandwiches and coffee, he sent me off with a number of goodies, including copies of two other publications he produces.

One I was already familiar with: Plain Interests, a thinner, more recently-launched correspondence paper. The second I was not: The Old Country News, an ad-free periodical featuring reprints of stories and recipes of yesteryear. The WSJ article shares a single quote from Elam, suggesting why his papers have succeeded: “We don’t have TV or radio or things like that.” 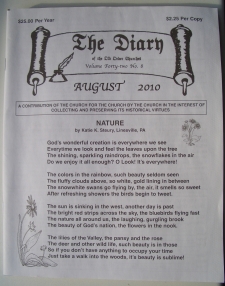 If given a chance to elaborate I imagine Elam would tell you it is about more than just entertainment (though that certainly is part of the appeal of many of these publications).

Elam’s papers are just a few of many periodicals the Amish go through each month. These include monthly devotional pamphlets, free advertising papers like the Fishwrapper, and correspondence journals like The Budget and Die Botschaft.

Some are published by Amish or contain Amish-generated content, though a number do not, being produced by Christian organizations or by local sources. Readership also goes in the other direction, with quite a few non-Amish subscribing to Amish publications.

What about you–do you read any Amish periodicals? Why do you find them appealing?