While playing Amish taxi a few days ago, I found myself behind a buggy on one of Lancaster County’s countless curvy backroads, unsure whether it was safe to pass or not.  Lancaster is hilly, and the roads go this way and that, with buggies everywhere, so you do this a good bit.

I decided to wait, with a couple of vehicles behind me, until the sightline cleared enough to be sure I could get by safely.  As we drove along I wondered aloud to my Amish passengers:  Which driver is a bigger threat on the roads of “Amish Country”–the tourist, or the local?

On the one hand, I once saw a driver with New York plates at a standstill on, I believe it was 896, one of the busier secondary highways in Lancaster County (45 mph speed limit, curvy).  This fellow looked to be lining up a photo of an Amish buggy (rare find!)  Some tourists do dumb things like this.  They’re also not used to the deceptively slow buggy speeds. 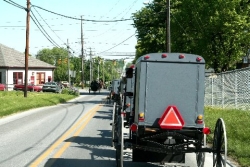 On the other hand, my Amish passengers that day felt that locals generally posed a greater danger (something I’ve heard others say).  They see Amish buggies every day, are used to driving around them, and can get impatient.

I don’t really share as much as I could about buggy accidents here, since they seem to happen so frequently (once every few weeks?) Yesterday a buggy was hit in Geauga County, killing the horse and critically injuring the driver.  The driver just didn’t see the carriage and struck it on a hillcrest.  No word on whether it was a tourist or local person behind the wheel.