Amish and PA German ideas for cooking with veggies

A large brimming garden is a standard feature of Amish homes.  Amish eat a lot of home-grown vegetables, including tomatoes, eggplants, spinach, and beets.  Some of the garden crop gets canned for the winter (see Amish Canning Recipes).  Much is cooked and served up in a wide range of hearty dishes.  Try some of these classic Amish and Pennsylvania Dutch-style vegetable recipes at your next family meal.

Shred cabbage to a rather fine consistency. Place shredded cabbage into sauce pan and salt lightly. Cover pan and heat over a low flame, steaming cabbage until very tender. Beat the egg.  To the egg add sugar, salt, vinegar, and pepper and  Pour over the steamed cabbage. Heat for 5 minutes and ready to serve. (adapted from Pennsylvania Dutch Cook Book of Fine Old Recipes)

Wash spinach well. Sprinkle with salt and cook until soft. Do not add water. Once spinach is tender, remove and chop it very fine. Melt the butter in a saucepan. Add the flour to the butter and mix. Slowly add the milk, stirring constantly until the mixture reaches a thick consistency. Combine the mixture with the chopped spinach.  Add a dash of pepper and the nutmeg, and serve. (adapted from Pennsylvania Dutch Cook Book of Fine Old Recipes)

Wash the spinach thoroughly. Drain and cook in a covered pot (with a little water) for 8-10 min on moderate heat. Drain and chop the spinach. Add milk, the eggs, 1½ cups of the bread crumbs, melted butter, pepper and salt.  Mix well. Sprinkle the bacon and leftover ½ cup of bread crumbs on top. Bake for 35 min at 350 degrees F.

Wash eggplant well. Remove the skin, and cut eggplant into very thin slices. Sprinkle eggplant with salt and place slices on a plate in a pile. Cover eggplant slices with another plate.  Allow to stand about half and hour to draw out the juice. Next sprinkle eggplant with flour.  Fry slowly in a little shortening until eggplant becomes crisp and reaches a golden brown color. Alternately, eggplant may be dipped in egg and cracker crumbs and then fried in deep fat. (adapted from Pennsylvania Dutch Cook Book of Fine Old Recipes)

Pare the egg plant.  Cut in slices of ½ inch thickness. Soak eggplant slices in salt water for about 60 minutes. Drain eggplant and wipe slices dry. Dip the slices in beaten egg then roll in cracker crumbs or fine bread. Fry in hot fat (or deep fat) until well-browned on both sides. Goes well with tomato sauce or ketchup.

Boil a young summer squash whole (do not peel), using as little water as possible.  Cook squash until tender. Drain squash well, mash, and set aside to dry out remaining moisture. Stir occasionally.  Season to preference using salt, butter, pepper and cream. If using an old squash: remove the peel and seeds, and then slice and season as described above. (adapted from Pennsylvania Dutch Cook Book of Fine Old Recipes)

Remove the tomato stems and cut out the centers of the tomatoes. Fill tomatoes with a stuffing made of the remaining ingredients.  Place into a baking dish and bake for half an hour at 350 degrees F. (adapted from Pennsylvania Dutch Cook Book of Fine Old Recipes)

Set a layer of tomatoes into a casserole dish or greased baking dish.  Add half the sliced cucumber and onion, and half of the crumbs. Add more layers using the remaining tomatoes and the cucumbers, crumbs and onions. Top with tomatoes and sprinkle with cheese. Bake for 40 min at 375 degrees F. 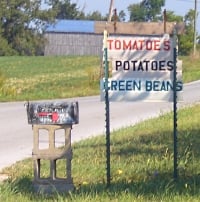 Tomatoes and other veggies advertised outside an Amish farm in Kentucky

Cut large, solid, ripe tomatoes into slices of ½ inch thickness. Dredge thickly with flour. Fry tomato slices quickly in 2 tablespoons of hot butter.  Be sure to browning both sides thoroughly. Remove tomatoes and place on a serving dish.  Sprinkle with salt, pepper and brown sugar to taste. Keep tomatoes warm. Add 1 tablespoon of butter to the pan fryings and then blend in a tablespoon of flour. Add the milk and cook the mixture, stirring continuously. The resulting mixture should reach the consistency of thick cream. Pour this over the tomatoes and it is ready to serve.

Slice up celery and then cook in a little salted water, until tender and almost dry. Create a dressing using egg, flour, sugar, vinegar and water.  Bring to a boil and add the sour cream when it thickens. Pour this dressing over the celery.  Heat and serve.

Cut off beet tops while leaving 2 inches worth of the stems. Clean beets well, then place in pot and cover with boiling water. Cook beets until soft.  Slide off the outer beet skins and dice. Strain and save 1 cup of the water in which the beets were cooked. Add butter, sugar, vinegar. Thicken with 1 tablespoon of corn starch and then cook to the thickness of cream. Add in the diced beets, pepper and salt, and heat.

Boil the parsnips in salted water. When they become tender, peel and remove the core.  Mash the parsnips. Add in the shortening, bread crumbs, salt, pepper, sugar, plus 1 egg (and the beaten white of the second egg).  Mix well and shape  into cakes. Add a small amount of milk to the remaining egg yolk and beat. Dip the parsnip cakes into the egg, roll in bread crumbs or corn meal.  Fry to a nice brown color.