A tragic story out of Kentucky yesterday:

BATH COUNTY, Ky. (AP) — Authorities in Kentucky say four children died, and one is missing, after a horse and buggy carrying an Amish family was swept away while trying to cross a low-water bridge over a flooded creek.

Kentucky State Police say all six people were swept away when the buggy overturned in the muddy brown water in Bath County.

Police say the adult in the buggy was able to reach the bank of the stream and call for help.

Four bodies were found Wednesday and personnel from multiple agencies are still searching for the last missing child. 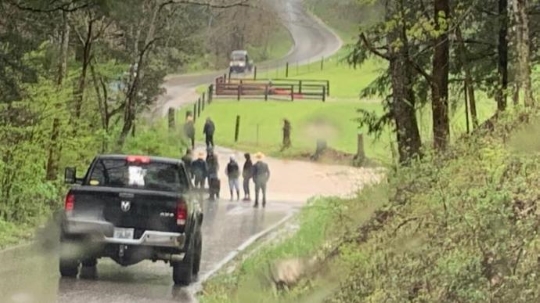 Investigators say the accident happened around 4:20 p.m. in the Salt Lick Community near Adams Road, north of Interstate 64.

KSP says an Amish family of six tried to cross a low water bridge when their horse slipped, causing the buggy to overturn. The lone adult was able to get out of the water, but the five children were swept away.

According to troopers, they entered the water and found it deeper than expected. The horse lost its footing as they were backing the buggy up.

This report is from earlier in the course of events, when only one child had been found. It describes heavy rains earlier in the day. There is a more recent report here but it’s not embeddable.

A local resident described the scene:

Missi Mosley and her boyfriend rushed to the scene on their ATV after hearing the call go out on the scanner.

“It was devastating,” Mosley said. “The waters are so swift and the rain was pouring down. It was just a somber feeling.”

Mosely says at one point there were about 35 people helping search. They plan to search throughout the night.

A 4 AM story update confirmed that crews were still searching for the missing child.