Time for the winners!

Thanks to everyone who read the interview with Sherry Gore, author of Taste of Pinecraft: Glimpses of Sarasota, Florida’s Amish Culture and Kitchens.  What fun it was to get Sherry’s inside take on this unique community.  Also really enjoyed reading your comments and great questions.

Before we roll out the winners, I asked Sherry if she could share a recipe and story from Taste of Pinecraft.  The following bit is originally excerpted from the Pinecraft Pauper, and was written by founder Daniel Fisher, with a recipe from Pinecraft local Sadie Hochstetler.  I’ve never heard of “Fluffy Pumpkin Pie” but with the recipe calling for 24 large marshmallows I have no doubt that it is!

Who is it that churns out the goodies from the bakery at Yoder’s Restaurant? It is Mary Yoder & staff: Mrs. Yoder’s outlook for the winter is this: “We’re gonna have an awsome season.”
“Are you ready for it?”
“Bring it on!”
Baking gives her pleasure, she declared, for she is “carrying on Mom’s tradition.” I offered her a million dollars for the secret pie dough recipe, but she said it would take more than that. It crushed me right down, for a million was all I had on me.
Daniel Fisher * Pinecraft Pauper
Fluffy Pumpkin Pie
24 lg. marshmallows
1 (15 oz.) can pumpkin
1/2 tsp. cinnamon
1/2 tsp. allspice
1/4 tsp. salt
1 cont. frozen whipped topping
In small saucepan melt marshmallows over low heat. Remove from
heat and stir in pumpkin and spices. Cool, then add 3/4  cont. whipped
topping. Refrigerate at least 4 hrs. Decorate with rest of topping.
Sadie Hochstetler *Pinecraft, FL 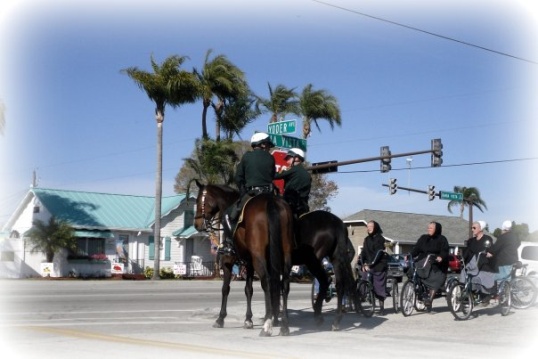 The Amish in Pinecraft don’t use horse, but officers of the law do

And here are the five winners of a copy of Taste of Pinecraft, chosen at random using random.org.   If you left more than one comment that is great, but I just counted the first one for contest purposes:

Congratulations to all.  Winners, please send the address where you’d like the book shipped (send to me at amishamerica@gmail.com) and I’ll pass along to Sherry.

If you didn’t win, you can pick up a copy of the book at Sherry’s site.  Also, if you would like to get a further fix of Pinecraft, Katie Troyer (author of the mounties photo above and fishing photo below) shares photos and writes about life in that community here.

Finally, be sure to check back as there are about 5 more giveaways of other books scheduled for the next couple-few months.

And how about one more excerpt and recipe, before we go?

Here’s a fish story found in Sherry’s manuscript. It’s an excerpt from a Nov., ‘09 Budget letter:
Son Tyler has had pretty good success
fishing in Pinecraft Park (lately). Just
last week he reeled in a 31 in. tarpon, which
he released. Not everything he’s hooked has
been so good however. The other day Tyler
cast his line into the waters and was dismayed
to pull up, of all things, a discarded pickax tool.
This is in the very spot where Tyler had used to
jump into the Phillipi Creek from a rope swing. it was the
sighting of an enormous toothed gar fish which dis-
sueded him from trying that anymore. 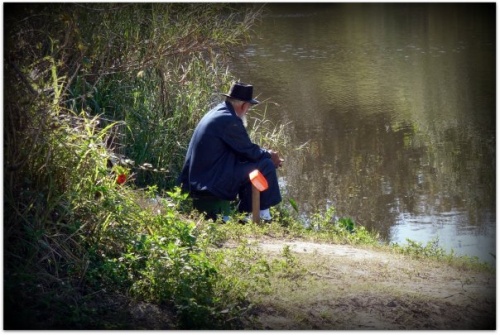 Looking for a lost pickaxe?

Pending the fish story is a recipe for Grilled Lime Fish Fillets:
2 lbs. fish fillets
Canola oil
1/2 c. butter
1/4 c. lime juice
Salt
Pepper
Paprika
Brush fish with oil and sprinkle with paprika. Place fish in hinged grill or on well-greased grill 3-4″ from medium coals. Cook 5 to 7 minutes on each side or until fish flakes easily with fork, basting frequently with mixture of butter and lime juice. Just before serving, sprinkle with salt and pepper. Serve with fresh lime wedges, and white or wild rice. For bacon-wrapped fillets: before placing fish on grill, place lime slices on side of fish; wrap fish and lime with bacon slices. Secure bacon with toothpicks.