The person driving the abandoned stereo-equipped buggy is now known.

The story in a nutshell – a deputy in Trumbull County, Ohio pulled over an Amish buggy which was going down the road with a twelve-pack of beer on its roof.

The people inside jumped out and ran off into the woods, leaving behind their horse and vehicle, inside of which was a stereo system paired with a hefty set of speakers. 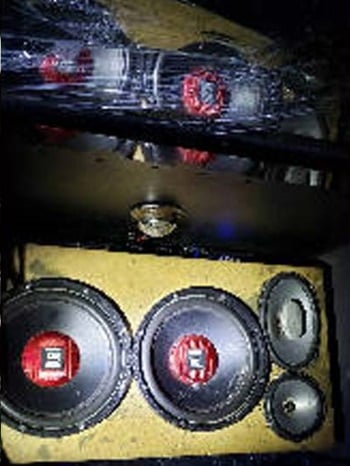 This is why the story ended up going viral (though Amish youth putting sound systems of various sorts in their vehicles is hardly unheard of).

Now the buggy driver’s father has come forward to claim responsibility on behalf of his son. From wfmj.com:

An Ashtabula County man said his son was driving the liquor-filled, stereo-equipped Amish buggy that was abandoned in Mesopotamia Township when a Trumbull County Deputy pulled it over last week.

According to a sheriff’s report, a Windsor Township man told a deputy that it was his son holding the reins of the buggy a week ago early Sunday when the deputy spotted males drinking as they drove along Doneley Road.

The son, who remains unnamed, was then questioned by the deputy. He admitted to it, but is refusing to give up his friends:

After learning the name of the buggy driver from his father, the deputy questioned the son last Wednesday.

The driver told the deputy he drank between ten and 12 beers that night and ran because he did not want to get into trouble.

He admitted disregarding the deputy’s call for him to come out of the woods,

Although the buggy driver claimed that the alcohol belonged to him, he would not reveal the ages of his companions, only saying he had known them for five to seven years.

It’s unclear whether or not charges will be filed.