It seems the oddball goats with the crazy horns growing this way and that out of their heads that I found on an Amish homestead in Pennsylvania turn out not to be goats at all–I’ve been informed that they are what is known as ‘Jacob sheep’.  Thanks to Bruce B-T and Mike for pointing it out.  Bruce recommends a site offering more on Jacob sheep (Update: no longer online).

I also checked that old compadre, Wikipedia, and have learned that apparently these are quite rare sheep, with an ‘estimated fewer than 5,000 global population’, making them a threatened variety.  I didn’t feel as bad about my mis-diagnosis when I read Wikipedia referring to them as ‘resembl[ing] goats in their conformation.’

Whoever wrote the Wikipedia article seems to know what they are talking about.  They go on to explain lots of stuff about fleece and docking the tail and so on, and that the Jacob sheep can have up to six horns, growing in all sorts of strange configurations.

This wiki also informs us that ‘Jacobs have been used as attack sheep in Gloucestershire, in the manner of attack dogs, to protect farm property from vandalism.’

Now, the link provided as a citation has expired, and this is Wikipedia after all, so take that tidbit with a grain of salt.  But the idea of an attack sheep.  My, my. 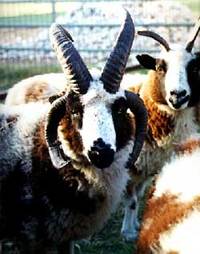 Bruce also points out the Biblical nature of the sheep’s name.  From Bruce’s link we learn that ‘the name Jacobcomes from the Old Testament story of the dealings between Jacob and hisfather-in-law Laban. This Biblical story of Jacob’s striving to achievespotted sheep and goats is thought to be the earliest record of selectivebreeding.’

While we’re at it, let me mention a related innovation: a rent-a-goat program in Seattle.  They exist.  Don’t believe me?  Google it.

Okay, enough of that.  If I’m not careful before I know it I’ll be renaming this blog Goat America.