On Friday NPR published a report titled “Convincing Amish Communities To Get Vaccinated As Their COVID-19 Cases Surge“.

The bold was added by me to draw your attention to that scary word. This was an “All Things Considered” audio report which became the article linked here.

This headline got my attention because it seems all the news I’ve been hearing is cases are generally going in the opposite direction. And I haven’t seen anything lately on Amish cases specifically “surging” or even increasing.

But maybe this report has some new information for us? Here’s a screenshot of the article on the NPR main site: 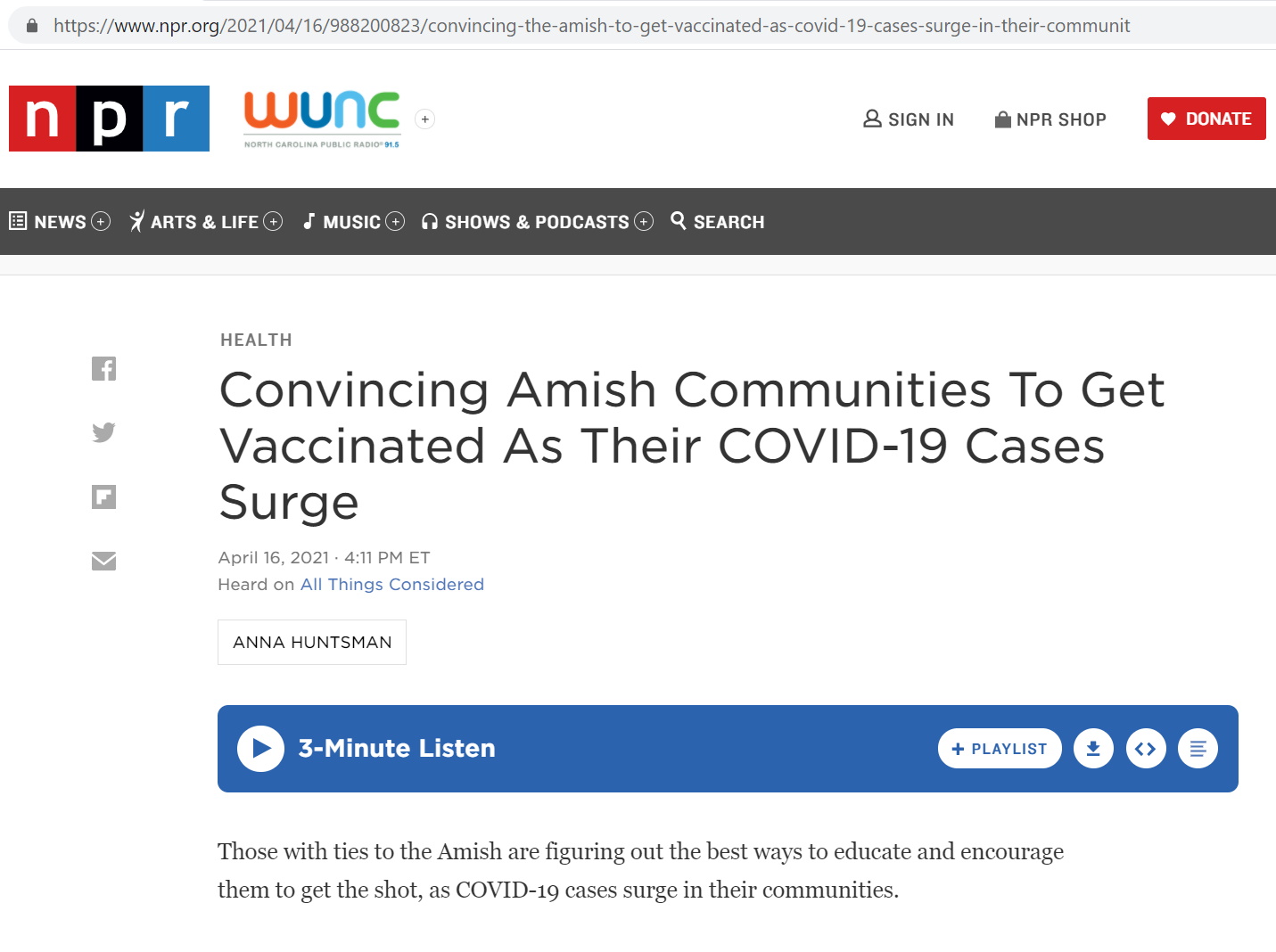 Reading the article though, that’s not the case.

Now, they could at some future time “surge”, or even be increasing right now on the way to an eventual “surge”, but that’s not what the title suggests. And there’s no evidence provided in the article that Amish COVID cases are right now increasing.

People might believe they are, but what NPR reports falls well short of what their headline claims. Let’s take a look.

Note: the original audio report does not include this headline (at least in the recording they provide). My issue is with how the online article has been put together – and whoever added the title (and more…see below).

“Surge” in the text

I’ve bolded all the instances – 5 of them – where the word “surge” appears beyond the headline:

Subheading: Those with ties to the Amish are figuring out the best ways to educate and encourage them to get the shot, as COVID-19 cases surge in their communities.

Right from the start, what we read in the title is stated again by the subhead. If there was any question about the headline, this only reinforces the idea that cases are going up right now.

It’s not “anticipated surge” or “worries over a possible surge” or etc. It’s “as COVID-19 cases surge in their communities.” Uh-oh.

Opening paragraph: Health officials in rural America are struggling to vaccinate one of the most isolated groups of all, the Amish. And they are worried that another COVID-19 surge could be on the way.

Hmm, now we see the surge actually just “could” be coming. People are worried about it. Okay, not exactly the same thing as the headline and subhead though. Let’s read further.

Later in the story: HUNTSMAN: Holmes Health Director Derr is concerned about another surge now that more contagious variants of the virus are spreading across the country. He worries those who previously contracted the virus may not be protected.

DERR: We had to open up extra wings in our hospital to kind of cover that. And as a region, we definitely surged over the winter. And we know that that happened about 90 days ago. We’re primed and ready for another surge because we’re not vaccinating enough.

So a person in the know, Health Director Michael Derr, is actually not saying a surge is ongoing – but that it happened (past tense) 3 months ago, and it could happen again.

“Could happen” is different from what NPR’s title and subheading report. 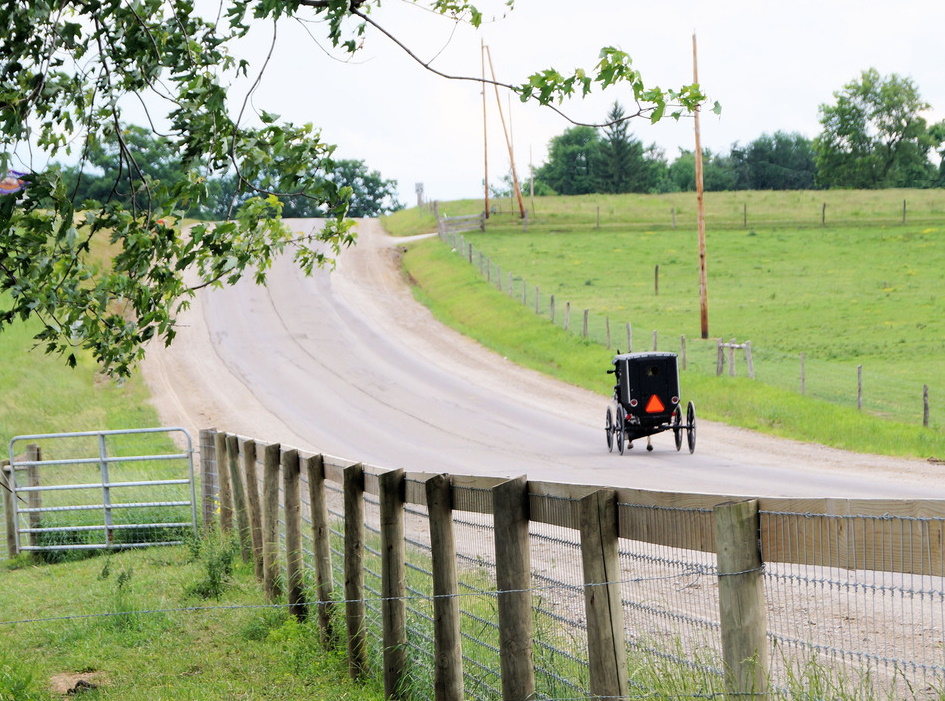 Read the rest of the 3-minute transcript. I’m not seeing any evidence or links to sources supporting the idea that cases are right now surging in Holmes County, or other Amish communities.

Maybe it’s out there. But this report by NPR doesn’t provide it. So did they just “report” a non-existent Amish COVID surge?

I’ve spent the past year observing and writing about media coverage of the Amish & COVID-19 – here on this blog, and later in an article for the latest JPAC.

If I was writing that article today, I’d probably include this report. It would go in the section on what we could call questionable news stories.

It would fit alongside other examples such as the Iowa station that tried to “gotcha” the Amish over supposedly violating a governor’s order on schools. Or the Ohio station which used some irrelevant or at best questionable photos to enhance a story on Amish possibly violating a stay-at-home order.

What I see in this NPR article is a vaccine promotion headline that doesn’t match what’s in the story. No one is truly “neutral”, but NPR at least has the airs of a more straight news outlet. I’d expect to find that mismatch on an activist blog or at a more sensational news business.

Whoever wrote that headline might need to consider Remedial Headline Writing 101. Or, it was intentional. I don’t see an option “C” here. Do you?

Nowadays, the headline is the report

As the amount of info has exploded and we have to filter more and more news, the big-letter text at the top of the page matters more than ever.

Nowadays, people read headlines and they maybe skim the article. That’s what creates the impression of what’s going on.

I get that an attention-getting headline is important. I create headlines myself, daily. But you have to stay on the right side of the line.

I also get that people are worried about whether the Amish are getting the COVID vaccine. It’s been a big topic over the past couple of months. I’ve spoken to at least four reporters about it in that time. And there has been a lot more coverage of it than that.

Whether you agree with them or not, Amish have the freedom as individuals to choose to take a vaccine, or to abstain.

For those that want to convince Amish to vaccinate – I don’t believe media “reports” intended to generate public pressure on them is the best way to reach them on this issue.

Just because you believe Amish should vaccinate – or whatever other cause in the world you might believe in – doesn’t mean you get to check out on doing your job properly, newspeople.

I’d hope NPR would stick to reporting what’s actually happening, especially in the part of the article that matters the most (the headline).

I’m not operating under any delusion, however. Headline-content mismatch is nothing new. I do think we’re seeing it more often now in places where previously we might not have.