“New York” and “Amish” may seem an odd match.

But the Empire State has seen its Amish population soar in recent years, and is currently home to the 5th-largest grouping of Amish in North America.

Karen’s new book New York Amish: Life in the Plain Communities of the Empire State is the first to explore Amish settlement in the state. 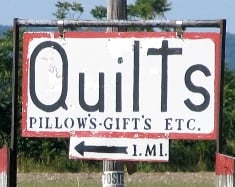 While you won’t find any Amish on the island of Manhattan, since 1949 they have established nearly three dozen settlements across the state, from Western NY to the North Country near the Canadian border.

Today, Karen answers questions about the Amish of New York state, in this first part of a 2-part interview.

We’re also giving away a copy of New York Amish.  There are 2 ways to enter this contest:

…for a possible total of 3 entries.  The winner will be drawn at random in one week’s time, on Thursday Sep 16th. (entries accepted until midnight EST Wed Sep 15th)

I found the book fascinating and one of the best I’ve read on the Amish.  I hope you will too.  Thanks to Karen for sharing such an interesting interview.

Amish America: In recent years the Amish population in New York has grown by leaps and bounds.  What are reasons Amish have found the Empire State attractive for settlement?

Karen Johnson-Weiner: The Amish are moving for different reasons. Many are coming from large, crowded settlements, while others might be avoiding internal conflicts.  Some find they can no longer afford to purchase property in their home community—or there may be no farms available. They’ve come to New York State because there is available land at reasonable prices. New York offers them the opportunity to maintain—or even return to—an agrarian lifestyle.

AA: In New York Amish you examine the wealth of diversity across Amish society in New York, ranging from Swartzentruber to New Order communities.  Can you explain the implications of “being Amish” in different ways, i.e., how does this diversity affect daily life and relationships across Amish communities?

KJW: How a group is Amish—its Ordnung and the way the Ordnung structures the life of the church—shapes the work one can do, whether one can work with non-Amish and how and where, what kinds of technology one will use in the home or in the shop, how one will dress, whether your buggy has a top or a windshield, what one will study in school, and with which other church communities one will fellowship.

For example, members of the most conservative Swartzentruber factions are not permitted to work “in town,” and so carpenter crews can build houses only in rural areas—their counterparts in more progressive communities can work on homes and garages located within village or city limits. 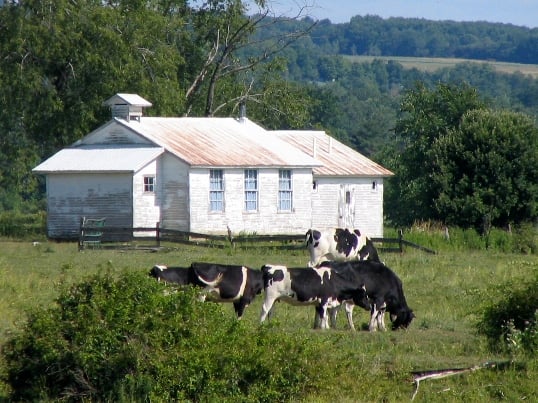 A conservative Amish school in the Conewango Valley

From birth to death, one’s life is shaped by how one’s community is Amish. A Swartzentruber baby wears cloth diapers and no rubber pants, while a baby in a more progressive community may wear a disposable diaper, meaning that washing diapers takes up much more of a Swartzentruber mother’s time than these tasks do in more progressive communities. Moreover, since the cloth diapers on that Swartzentruber baby cannot be the “prefolded” kind most stores sell, the mother has more sewing to do to make diapers.

Because the Swartzentruber Amish and other conservative groups have not accepted gas refrigerators or freezers (for example), women do much more canning than those in communities that have these things.  And, if your community has freezers, then the men don’t need to harvest ice in wintertime.

One’s church determines how one will do other tasks as well—some groups have chain saws and others don’t, some permit indoor plumbing while others sanction only (manual) hand pumps, and some permit battery-operated table lamps while others rely on kerosene lanterns. Women who must oil their wood floors plan housework differently than those who wash linoleum. How one is Amish also limits social interaction.  Young folks from one church group won’t date someone from a group that’s not in fellowship with their own. 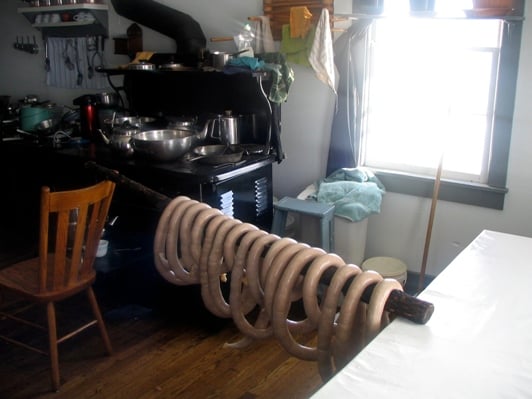 Sausage-making in a Swartzentruber Amish home

Amish diversity affects Amish interaction with the non-Amish world as well.  The Ordnung may limit the extent to which a group can comply with local ordinances.  Swartzentruber Ordnungs do not permit church members to display the slow moving vehicle sign on their buggies or wagons.  Many groups have had difficulty with local zoning boards.  Members of some very conservative Amish churches do not have social security numbers, which makes banking difficult.

AA: You describe the differing non-Amish responses to Amish settlement in New York, ranging from the newspaper letter-writer who described Amish buggies as “a good omen” to the one who rather viewed Amish transportation as “anything but…picturesque”, and  “an accident waiting to happen.”

Why the disparate reactions?  In what ways have Amish cooperated with the non-Amish public in New York, and how have they come into conflict?

KJW: Amish families often become good friends with their neighbors.  Depending on the type of Amish, members of the community may be working for or with non-Amish individuals or businesses, and Amish church members from all communities get to know the non-Amish with whom they interact.  Even Swartzentruber women running farm stands make close friends among their customers! 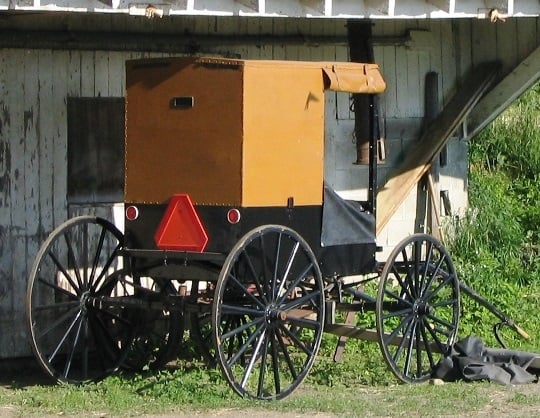 When there is difficulty—whether personal or resulting from natural disasters—the Amish are there to help their neighbors. When dairy farms were hit hard during an ice storm that cut off power across a wide swath of northern New York State, the Amish pitched in to help milk cows by hand. 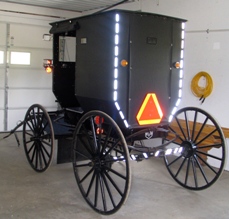 Clymer Amish buggies are well-lit, and  equipped with windshields and sometimes wipers

When the first Amish families move into a region, their non-Amish neighbors are often unsure about what to expect from them. Some praise them as pioneers, individualists, spiritual gurus, and back-to-the-land environmentalists, but others reject them as scofflaws, and religious extremists. Moreover, there are a lot of myths, half-truths, and imaginative fictions about the Amish, and when the Amish don’t behave like their new neighbors expect them to, there is sometimes resentment.

The Amish want to be good neighbors, but being good church members comes first, and this may cause difficulties—especially since one group may permit things that a neighboring group does not, causing those in the mainstream to wonder what’s really Amish.

Major conflicts have come over issues such as the refusal of very conservative churches to use the slow moving vehicle triangle on buggies and wagons, the inability of groups to meet state requirements for building permits, child labor, and children’s healthcare.

As I noted in my book, New York Amish, the Amish sincerely believe that they must remain separate from the world, and so being different or “unconformed” is a sign of faith. After all, the Amish say, if God’s truth is unchanging, then God’s church must also resist change. And because they are different in a fallen world, the Amish expect that they will be persecuted like their Anabaptist ancestors. 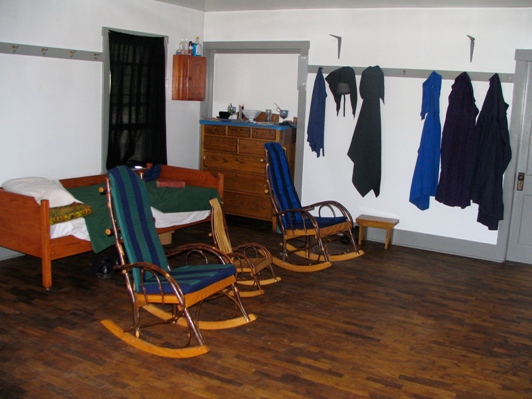 Inside a Swartzentruber Amish home

As a result, when Amish church members have to go to court because, having followed the Ordnung, they have violated different statutes and laws, they do so firm in their belief that they are suffering for their faith. Worldly society establishes the norms to which Amish society cannot conform and, thus, helps to shape Amish life. But, since rejection of social norms is, after all, rejection of those who establish them and the laws that perpetuate them, conflict may be inevitable.

KJW: The Swiss Amish have a somewhat different history than their Pennsylvania German counterparts; although they chose an Old Order path, few Swiss Amish leaders attended the 19th century Diener Versammlungen, which helped to define the Old Order Amish churches.

The Swiss Amish have a reputation for being stubborn, and their communities have been shaped by internal conflict.  Today the large Swiss Amish settlements in Indiana are marked by distinct clothing, buggy styles, and, of course, the Shwitsa (Swiss German) dialect they speak, which their Pennsylvania German counterparts find difficult to understand.

The Swiss communities in New York cooperate with their Amish neighbors, joining in barn raisings and shopping at Amish-owned businesses.  But their social interaction is with those groups with whom they fellowship.