How mobile are you? 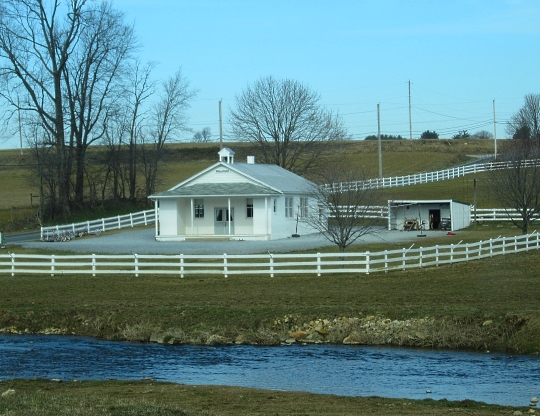 I’ve been traveling back to Poland so a little late with a post today. En route from Raleigh-Durham to London we had some sort of a radar malfunction (sounds scarier than it was; happily the plane could still fly) that necessitated a detour stop in New York so that they could fix the issue.  Two hours later we were in the air again, but it set the whole schedule back.  The joy of flying!  But as I always say–no complaints as long as I get there.

This is a photo of a friend’s childhood school in northern Lancaster County. He still lives in the area, not far from here.  Though Amish move a good bit, a lot stay right where their roots are.  It must be nice to have your school and youth-years stomping grounds a stone’s throw away.

Come to think of it I was fortunate to basically have the same growing up.  I didn’t have to go through the trauma of moving around a lot as a child; in fact we lived the whole time in the same house. It would be hard to think of it in someone else’s hands.  It is my parents’ place, and when I am there it of course still feels like home, and it did for the past 4 weeks.

Statistically speaking I wonder how many Americans never move.  A third? A half?  Those guesses both seem kind of high, given how mobile people are in the US, uprooting for work and opportunity (Poles on the other hand are less mobile).

I’ve moved around a lot since leaving home at age 18, but I’m glad I was able to be in one place in my younger years–and still have a place to go back to that says “home”.   In a way I guess I’ve had both experiences.

How about you–have you moved around a lot, or basically stayed put?