How do you consume the news?

I am something of a news junkie. I get my news in various forms–most often online, but also via television, radio, and even the old-fashioned dead tree variety. The news today is available in more places and more forms than ever before.

I see pluses and minuses in my news consumption.  On the one hand it can be useful to “know what is going on”. On the other hand, past a certain point I’m not sure how much being hyper-aware does for you. Reading the news is tricky because it is a form of entertainment, but it’s a “serious” one. We can justify spending a lot of time with the news by saying that as responsible citizens we need to “be informed”. 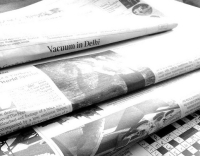 Like anyone, Amish too have an interest in what’s happening out there. However Amish consumption of conventional news media is generally more limited. Some catch radio broadcasts while riding to and from a job. The occasional person with computer access at work might browse internet articles. Word of mouth is its own category.

Not surprisingly, the newspaper is the most common way to get the news in Amish homes. Amish newspapers such as Die Botschaft and The Diary are among the most common. As Richard Stevick notes, “Acceptable reading materials vary from settlement to settlement…families frequently subscribe to the local newspaper.” (Growing Up Amish: The Teenage Years, p. 71).  Amish in Lancaster read the Intelligencer Journal, those in Holmes County the Wooster Daily Record.

Not everyone, even in the more progressive settlements, receives a daily paper however. Of my three closest Amish friends in Lancaster County, two receive a daily newspaper and one does not. I suspect in conservative homes the amount of English newspaper subscriptions drops dramatically.

The timeworn complaint about the news, of course, is that most of it is of the “bad” variety. Disaster and death get headlines.  I’d guess that uplifting stories are well outnumbered by ones that foster negative emotions.

It’s easy to point out things that Amish do differently and extrapolate that they must be happier because of performing behavior x or not doing y. In this case I do wonder if this semi-insulation from the news might contribute to a higher sense of contentedness among Amish. On the one hand you have the possibly-unsatisfied craving to know what’s going on all the time. On the other you have the threat of wasting a lot of productive time while overdosing on junky news.

How about you? How do you consume the news? Do you take in too much, too little, or just enough for your liking?