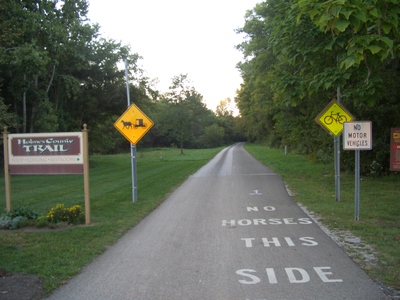 A couple years back I did a post on the Holmes County Trail, a remarkable conversion of an old rail bed into a recreational trail and safe transport link for Amish traveling through Holmes and nearby counties in Ohio.

The trail has an interesting design, which you can notice in the photo above.  One half, with a rougher surfacing, is meant for buggy/horse traffic, while the other, smoother half is intended for bicycle and foot use.

Amish do use the trail with some frequency, though since it is located on the western side of the settlement, fewer Amish use it than might be the case if it cut through the heart of the community.  I imagine that will change though, as Amish continue to move and settle areas west of Berlin and Millersburg.

It turns out there has been some controversy over the trail, as reported in an article I recently read in the Wooster Daily Record.  Some have argued that the land should have been returned to original owners when the railroad shut down;  there are also a few crime concerns.