From time to time we like to do these roundups of news and other bits:

Ben J. Raber passed away about 2 weeks ago. He was the second owner of Raber’s Bookstore, taking over the store in 1967 from his father John A. Raber. Raber’s best-known publication is the annual Almanac (first advertised as Der Neue Amerikanische Kalender für das Jahr 1930 in the Sugarcreek Budget) which contains an Amish ministers’ listing along with astronomical and church information.

In a 1982 Family Life article David Luthy writes that “The Calender was a turning point in Raber’s publishing venture in that it created a much wider market for book sales, reaching into Amish, Old Order Mennonite, Hutterite, and Old Colony Mennonite circles–all German-speaking people. From the first issue, the Rabers have included several pages of book lists, offering not only Raber imprints but books from other publishers as well.”

Luthy notes that the ratio of German-to-English titles offered has changed over the years, from the first list in 1930 in which nearly 9 out of 10 titles offered were in German, to the 1950 list in which 3 out of 4 titles were in English.  This ratio has fluctuated since.  Writes Luthy: “Another reflection of this trend to English is the fact that in 1970 two editions of the Calender, one in German and one in English, were issued for the first time and annually since then.”

Raber’s has not necessarily encouraged the trend to English, Luthy notes, with the vast majority of books actually published by Ben and his father being in German, with a number focused on the study of the German language (at least at the time of writing).  See “A History of Raber’s Bookstore”, Family Life, March 1982, for more.

Today Raber’s sells a range of both German and English titles.  You can visit Raber’s at 2467 County Road 600 Baltic, Ohio, or have a look inside the shop at this post on Raber’s Bookstore.

I was on Suzanne Woods Fisher’s radio program a couple of weeks ago, and somehow I forgot to mention it (we had pre-recorded since I was going to be back in Poland at the time of airing of this 2-year anniversary show).  You can listen here (the 3rd link down).  As usual we had a fun conversation on a wide variety of Amish topics.

Do you remember the tragedy of last summer, in which an impaired driver in New York caused an accident which killed 6 Amish people?  A sentence of 12 to 24 years was handed down earlier this week.  Steven Eldridge admitted to being high on cocaine and prescription drugs at the time.

After posting this week about the Amish and fracking I came across an article on plans to expand silica sand mining in the vicinity of a Wisconsin Amish community.  Amish and other residents are concerned over traffic and effects to the environment.

Money is another issue, at least for the Amish.  From the article: “Another [Amish farmer] said he was surprised to learn how much Hi-Crush had paid property owners for land to build its plant and mine. The company paid $13.5 million to acquire property for the mining operations, according to a company news release. The Amish farmer remarked it would be hard to stay a good Christian with that much money.”

Behind the counter at an Amish variety store in Pennsylvania: 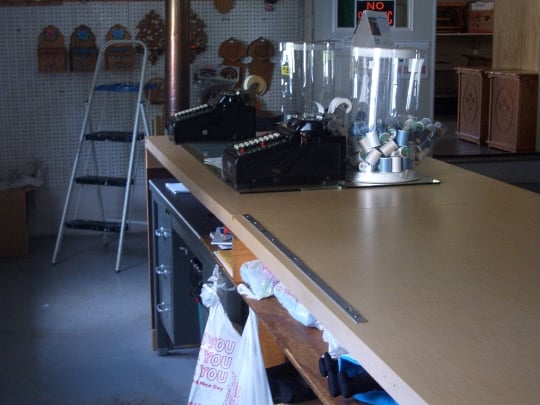