An update today brought sad news following the tractor rollover accident in York County, PA last Friday. A fourth child, a four-year-old brother of another boy who had died in the accident, has passed away. From the York Daily Record:

Jeffrey is a younger brother of 9-year-old Caleb Emmanuel Fisher, who died at the scene of the accident in Lower Chanceford Township on Friday, according to an obituary in LancasterOnline.

Five people now have perished as a result of the crash. State police say an old farm tractor pulling a flatbed trailer left the roadway and traveled down an embankment. Both overturned. One adult and 11 children were riding in the trailer.

From what I can tell, three children remain in hospital. One was treated and released, according to the article. There is no word on the condition of Amos Stoltzfus, who was driving the tractor at the time of the accident, and whose wife and two children perished in the event. He was described as being in “serious” condition and is assumed to be still in the hospital. 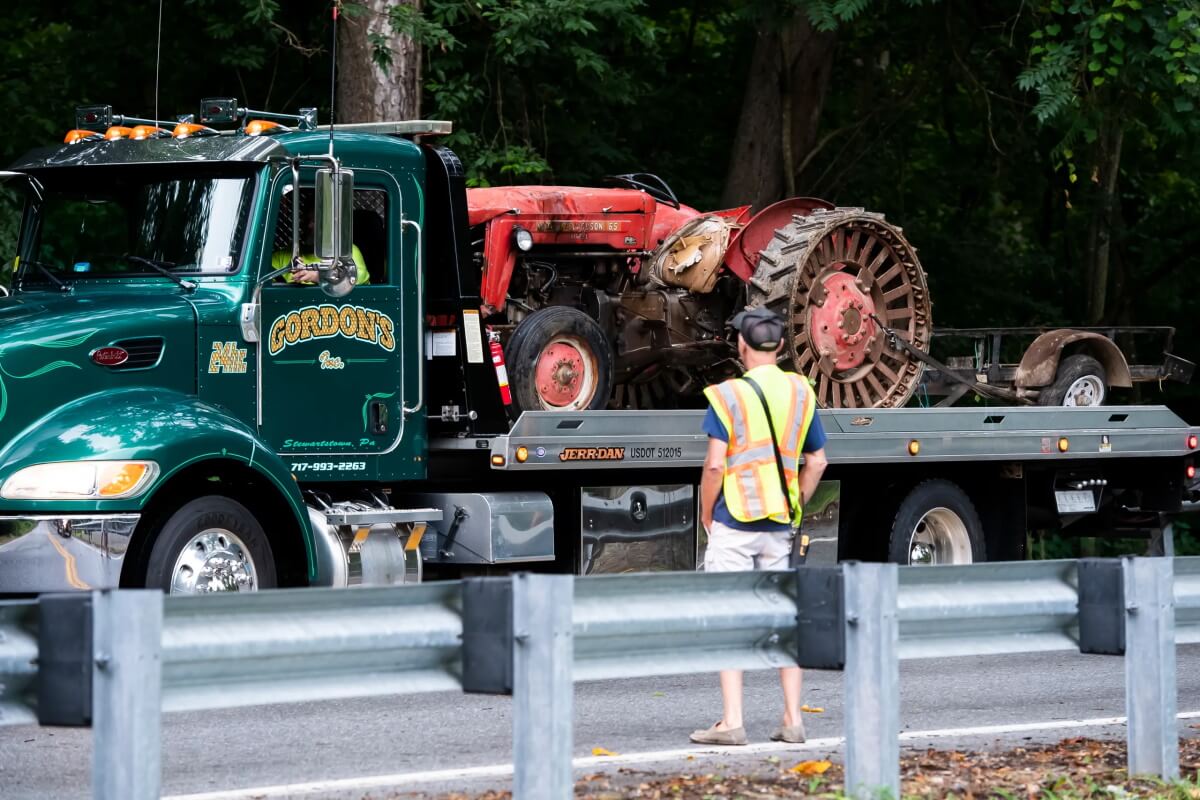 The tractor is removed from the scene of the accident. Photo: Dan Rainville/USA Today Network – PA

Someone has passed on a donation link via the Amish America Facebook page. So I had a look, and this is not on a major donation platform but seems to be run by a non-Amish farming family (Daily Crisis Farm) who knows the family(ies) affected.

It’s described as a donation for the “King Family”, though the last name of the two families mentioned are Stoltzfus and Fisher. However, Katie Anne’s maiden name is King, and the fundraiser to be held tomorrow at a local fire company is described as for the “Stoltzfus King Fisher” families. Here’s a note from the donation page:

A heavy read, but a family could use your help. If you know our farm you know their craftsmanship, the main dairy, the roof on the house, the pig barn and the addition to our cheese shed. When 🦋 got sick, they whipped up a chicken house in a week at cost to insure her a healthy environment and to keep her critters. Harvest a few years back, we went and helped drive horses to get their corn in and on brithdays we swap who buys the pizzas.

*The King Family of E&D construction is more than a crew of Amish, but also our family by choice. One of the sweetest groups of humans that we should all aspire to be. They have been a constant in our DCF world for over 10 years and now they need our help.

*Friday, July 29th, an accident took 3 children (5 still hospitalize), the mother, and left the father badly hurt. We are praying as we wait on more information.
*Our hearts breaks for them as they are just like our own family. We would like to help them out, they have a herd of milk cows needing tended, a flower field & crops to bring in and medical bills that will surely add fast.
* We have set up a link in our bio for donations. Or you can direct venmo us and we will get them 100% of the donations.

So, that is the only online donation link I have found. I asked the person who shared it for further info, but I don’t have a reason to think this is not legitimate, for what it’s worth.