Dropping in on the ‘Polish Amish’

Tomorrow I hit the road to pay a visit to Jacob and Anita Martin, an American couple that has been portrayed as Amish in the national media here in Poland.  The Martins have graciously allowed me and a group from Krakow’s Jagiellonian University to stay a couple days at their home in a village about an hour-and-a-half outside of Warsaw. 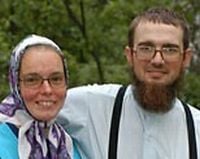 photo:  global.net
Since I’m joining the group late and will miss the pre-arranged transport, I’ll have a nearly 10-kilometer walk to get to the Martins’ village from the train station tomorrow morning.  Looks like that all that marathon training is going to come in handy.  Or if I’m lucky, I’ll hitch a ride on a horse cart headed in their direction.

From what I’ve read, the Martins live interesting lives.  Inhabitants of the village where they live mistook them for Orthodox Jews when they first arrived with two other American families some 15 years ago.  The Martins’ dress and appearance do resemble that of various Old Order groups.

photo:  rozstaje
At the same time, they drive a car, use a computer, attend a Pentecostal church, and have a last name that is more Mennonite than Amish.   The Martins caused a stir when they appeared on a nationally-syndicated talk show last fall, and have been featured in a documentary and in numerous articles in the national media.

In any case, it should be a nice trip.  I’ve heard they have a large home, and hopefully so, as there will be about a dozen of us, plus the Martins’ eight children.

I’m planning on bringing some Ohio Amish apple butter and some hot sauce that I’ve smuggled in from the States.  Might end up being a welcome change from powidlo sliwkowe (plum jelly) and chrzan (horseradish), the local specialties here in Poland.

Tags: Amish in Europe, Diversity among the Amish