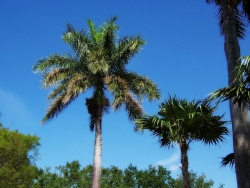 The Florida Amish outpost in the Pinecraft district of Sarasota is unusual in a number of ways.

For one, its size waxes and wanes with the seasons.  Every year in the fall and winter months, an influx of Amish vacationers boosts a hard core of full-time residents.  Right now we are in the summer off-season, but come autumn, a slew of northern buses will arrive, bringing Amish travelers from Indiana, Ohio, and other states.

I describe the numerous other reasons Pinecraft is not your typical Plain community in a new Florida Amish profile for the Amish State Guide.  Hope you enjoy it.

Also: Amish woodworkers are better known for vacationing in Florida than for manufacturing furniture there. However, Amish woodcraft can be found in the state at numerous locations. Read more: Amish furniture-Florida.
Photo credit: Herb Hernandez