What’s the best way to quit a bad habit?

Today’s question is inspired by an anecdote a reader noticed in the February 2013 “Mexico Mennonite Aid Update”.  The following was related by Steve L. Yoder in a section entitled “A Deadly Weed”:

Very few can kick the habit as an Amish friend of mine did. In bygone years the local drug stores always had cigars and cigarettes in their store windows right by the sidewalk.  He could not pass by there without going in for some cigars.

At some point he decided to quit.  So the next time he came to such a window he stopped, looked in, and spoke to the cigars.  He asked them, who is boss – you or I? I am!!  He never smoked one after that.

Cold turkey quitting stories are often dramatic and highly tellable.  My grandmother was just sharing hers with me.  She was traveling from Poland to visit her daughter and son-in-law in the US (my parents).  This would have been in the mid-80s, and her stay was being financed by my mother and father.

She decided she wasn’t going to burden them with the cost of her cigarettes too, and smoked the last one right before heading off to the airport. I told her I’m glad she did that, since she probably wouldn’t be around right now otherwise.

Steve Yoder may be right when he writes “very few” can quit this way.  But some claim cold turkey is the only way to go.  Like tearing off a band-aid in one swoop, or diving into cold water instead of tip-toeing in, the pain is intense but short.  Others preach gradual change, or swear by substituting good habits for bad. 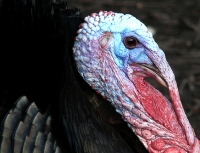 I’ve never been a smoker, so haven’t had to stop that one.  The things I’ve abandoned are more benign: sweets, too much television or caffeine. For four winters in high school I was on the wrestling team, the only time I really had to stick to a strict diet (painful enough when you’re a calorie-ravenous teen).

Maybe attitudes and mindsets can fit in this as well.  Some pre-coffee mornings I can be a grump, but am definitely more positive now than in my early 20s.

How do you change your habits?  Is it best to go “cold turkey” as the Amishman did, or more gradually?  Where do you find the strength to do so?