Here’s a pretty mundane news story about buggy warning signs being painted over with big red X’s in a Minnesota Amish community (no longer online).

This sort of thing goes on to greater and lesser degrees in many places where the Amish live.  Could the culprits be English bigots, kids out for a prank, Amish youth even?  Does it matter?  Just a dumb thing to do. 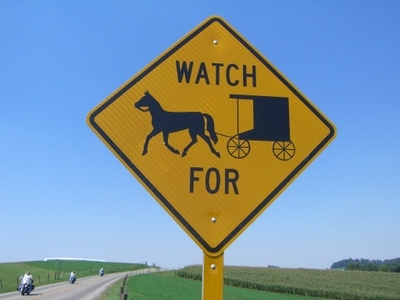 More interesting was the comment of a local highway engineer, who described himself as being ‘sickened.’  The general rational-thinking public seems to react pretty strongly whenever it seems the Amish are being picked on.  And perhaps even more so today, post-Nickel Mines.  It’s true this could have potentially endangered some buggy drivers.

Why do some non-Amish come out so strongly for the Amish?  Some English idolize the Amish, perhaps having a misguided, false-nostalgic view of them as representing a lost, purer past.  Some idealize them as innocent, more virtuous than the common man, even helpless to a degree, and thus deserving of extra protection.  That’s a pretty condescending viewpoint to take.  Most Amish certainly don’t see themselves that way, or wouldn’t want to be viewed in that manner anyway.

In any case, it often works to the benefit of the Amish, from the times of conflict over schooling to the present day, seen in the support given after the shootings.  Yet as the story shows, some seem to have quite opposite feelings towards the Amish.  It’s funny how a group that claims itself to be not of this world can in fact be so polarizing among those of this world.