As you drive around your neck of the woods, it’s increasingly likely you might bump into some Amish.  With new settlements starting yearly, and with communities now present in half of the states, you no longer have to go all the way to Lancaster County to run into some Amish.

Here are a few things to look out for that might just mean you’ve come across an Amish settlement (Some of these may also indicate Old Order Mennonite or other Plain and related groups):

No electric means no dryer.  Huge families, relatively small wardrobes, and hard-working, hard-sweating ways keep the Amish housewife constantly washing.  This forces her to keep a keen eye on the sky as well. 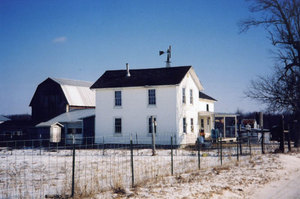 Amish homes are traditionally white.  This may depend on the community.  Some Amish homes come in shades of gray and beige.  Some  wealthier settlements now favor building with brick and stone.  Still, white-painted wood or siding is common.

The Amish typically do not build homes with shutters. This has to do with their beliefs against ostentatious display—shutters are unnecessary frills. This may vary from settlement to settlement, however, as in certain areas shutters seem to be more acceptable.  In many cases, if you do see an Amish home with shutters on it, it may mean it was purchased from an English owner.

In an interesting aside, some Amish do have electricity in their homes and use it, at least temporarily…this fairly uncommon situation happens when an Amish family moves into a previously English-owned home.

Many church districts allow a ‘grace period’, usually up to a year, for the Amish to remove the electric installations and switch to non-electric. One reason, an Amishman explained to me after flipping the switch one evening, is the cost of changing the installations—he estimated it would run about $10,000 to do his home.

Locals sometimes get peeved at horses’ leave-behinds. Some buggies have ‘catchers’, but still, this form of ‘road debris’ is often seen, especially on heavily-Amish roads.

As you travel through Amish America, remember to keep an eye out and drive safe.

Leave a reply to Three sights