A Visit To A Swartzentruber Amish Rug Seller (12 Photos)

So another memorable stop from my recent Holmes County trip was at a farm I had first visited a decade earlier. This is a Swartzentruber Amish farm, technically located in Wayne County.

They have a creaky signpost by the road displaying whatever it is they have for sale. At the time, the only items on offer were rag rugs. 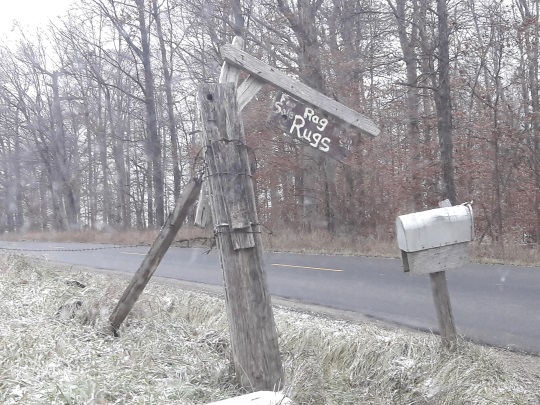 We’ve seen glimpses of this place here before. I had been down this lane I think sometime in 2007 or 2008. I have a photo or two from that visit floating around the site somewhere.

More recently, Mike Sparks shared his 2018 summer Holmes County visit with us, featuring a shot of the same spot. At that time the produce signs were out. You could also get some bunnies: 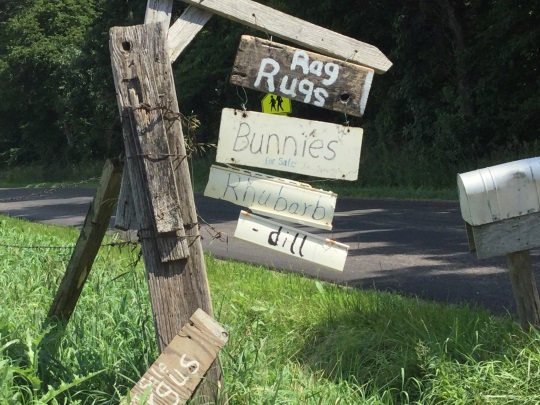 The place looked about the same as I remember from that visit over a decade ago, which is not surprising for Swartzentruber farms. This is the view across the fields going down the lane: 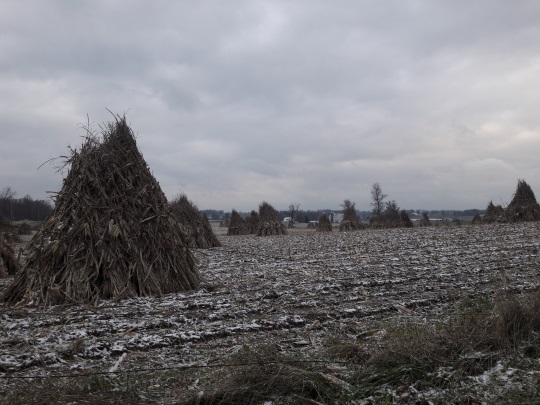 The maker of the rugs is a warm grandmother-age lady named Fannie Miller. If I’m not mistaken I had spoken with her once already when I stopped in on that earlier visit. Something about her seemed familiar. 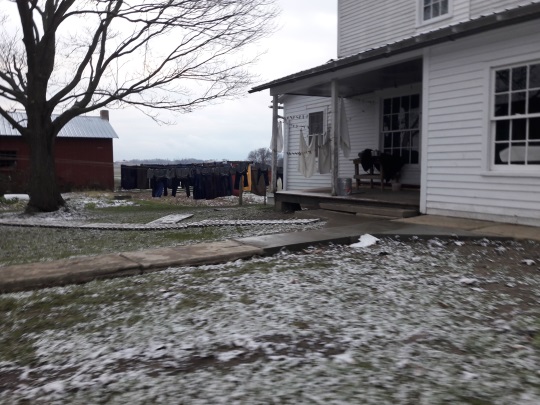 As I pulled in a man happened to be out maneuvering a couple of draft horses by the barn. I asked him where I’d find the rugs. He pointed to the second home, which appeared to be the dawdihaus (on the right in the photo below). 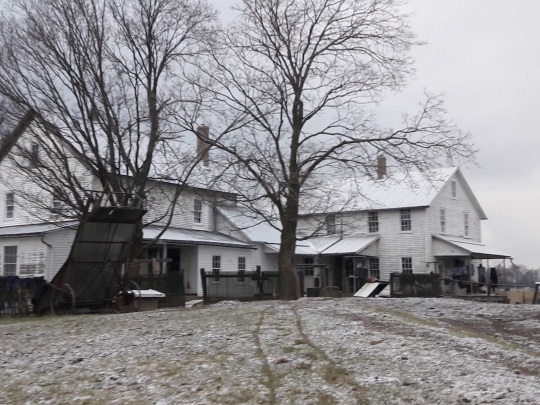 Fannie emerged after a couple of knocks and asked me in in to a sparsely furnished but warmly inviting room. After a little chit-chat she pulled out a box which had a stack of rugs folded up.

She began unpacking them one-by-one, displaying each in turn. Most were in the $20-30 range. Fannie also had a few quilt wall hangings, priced at around $35. Those were something like a 3′ x 3′ dimension.

After sorting through the rugs and narrowing down my choices, I settled on this one (displayed on the floor back home in NC): 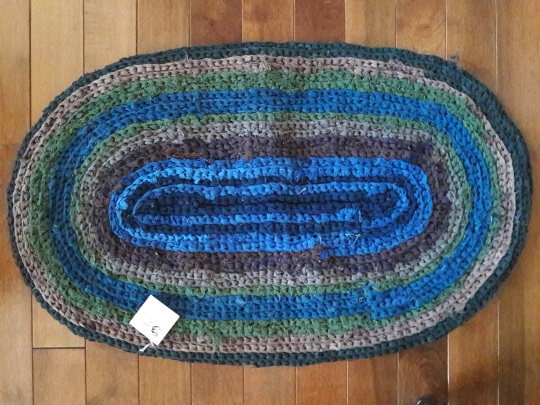 I’ll be frank – it isn’t the highest-quality rug. But, it’s not supposed to be. It’s a rag rug. The colors are nice. 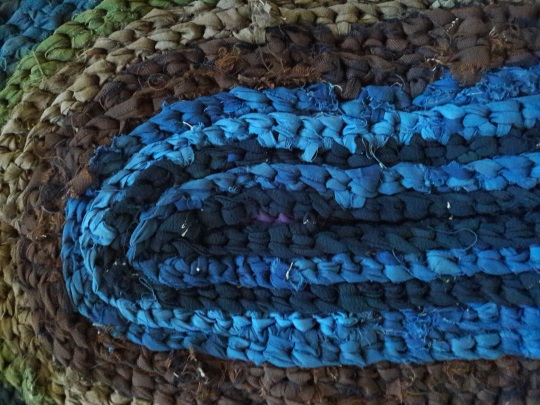 These are assembled from scraps leftover from making dresses. If need be, they add more material, Fannie explained.

I mentioned how it wasn’t the first time for me at her farm. Fannie seems like a people person and I think we both enjoyed the visit. No doubt in December they have fewer customers dropping by than they would in the summer. 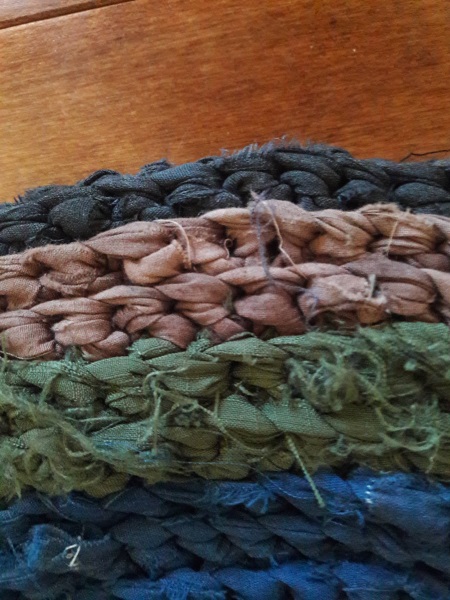 I paid her, took my rug and said so long til next time. Next time I might pick up one of her quilt hangings, or maybe some produce if it’s the right season.

You can see I paid $23 for the rug, which looked like it had been marked down. 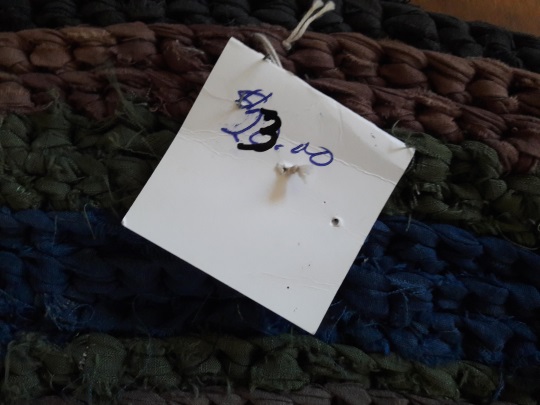 I got in my car and left, passing some chickens on the way out. 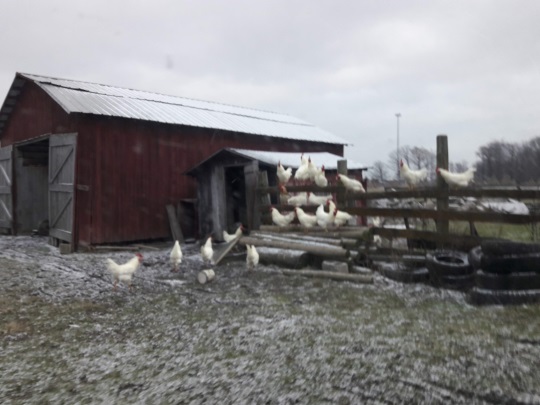 Heading back out down the lane. 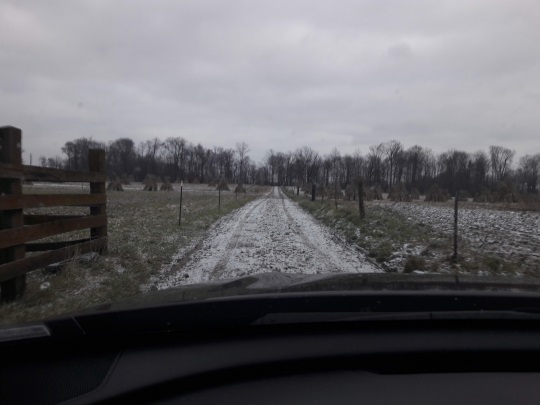 Where is the farm?

I don’t have the address, but the place is located near the corner of 250 and Kidron Road.

Once you turn south on Kidron Road, you go maybe a minute or two down the road, and after passing a small Swartzentruber school with a bluish door on the right, you’ll see a long lane going off to the right.

The farm lane is like any other Swartzentruber lane – dirt not gravel, not in great condition, and potentially muddy in the right circumstances, so be aware of that.

Here’s a view of the place from the road: 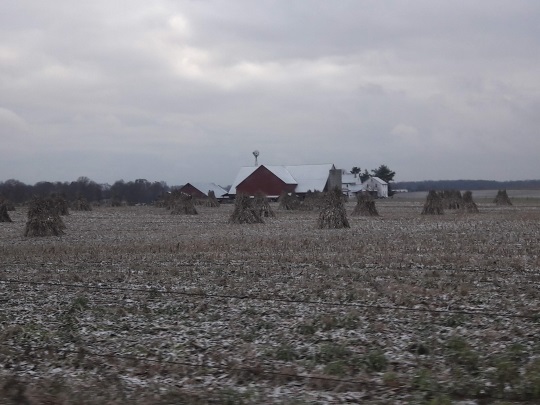 Fannie’s rug business is just one of many little home enterprises dotting the countryside in the Holmes County community.

One of the best parts of visiting Amish settlements is coming across little places like this, stopping in, picking something up, and maybe making a new acquaintance or friend.