Do you know these 12 similar Pennsylvania Dutch words?

While in Belle Center, Ohio a few months back, I had dinner with Mark Curtis and a young couple in his community. One of my favorite moments came after Mark said something in Pennsylvania German which seemed to baffle the three other “native Amish” at the table.

The man of the house, grappling with the fact that no one could put a finger on the meaning of Mark’s words, said something to the effect of “Mark’s more German than we are!” It was amusing, and I think tells you something for his appreciation for the language and culture he has joined. 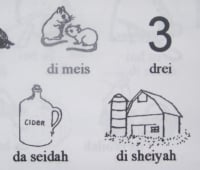 For our enjoyment Mark has sent along a list of Pennsylvania German words, arranged in similarly-sounding pairs. For some of you this is probably a cinch, for others like myself, baffling, and for still others, something in between.

Mark’s father Don explains that “Most are Pennsylvania Dutch words that sound just about the same but mean something entirely different.”

I’ve seen the answer key, and I can say that about 3/4 of these are nouns, in fact most are everyday items. Since there are different ways to spell Pennsylvania Dutch words, spelling here is approximate.

And by the way, if these were English expressions I’d tell you #2 is what I say when I bite into something nasty, and #3 is how we used to say hello back when we were the “cool” kids in school.