KY legislators to the rescue of Swartzentruber Amish?

There’s another possible out for Swartzentruber Amish in Kentucky who refuse the SMV triangle–a change in state law.

The Bowling Green Daily News reported Saturday that members of the Kentucky General Assembly were considering a change in regulations covering the SMV insignia.

The trials of 5 Amishmen in Logan County, set for Friday, were accordingly postponed til March. The “legislation…introduced in both houses of the Kentucky General Assembly…would change the law to allow for the display of silver or white reflective tape on slow-moving vehicles”.

There have been SMV cases in at least 3 counties in Kentucky over the past year, with Amish sent to jail again following last week’s sentencing in Graves County.

Rep. Jim DeCesare said he lent support to the issue after being contacted by Amish. “I thought their solution in lieu of using the triangular sign was a reasonable one and I got behind it,” he explains in the Daily News article. “I feel that if there’s a legitimate reason for them and their beliefs and if they’ve got a viable alternative, then why not allow it?”

As of Monday morning here, our Amish America poll is showing about 3/4 of respondents saying Amish should “reconsider” the SMV triangle, with 1/4 saying they should be left alone.  I don’t know how closely that result matches public opinion in Kentucky, or in the sponsoring representatives’ districts for that matter. 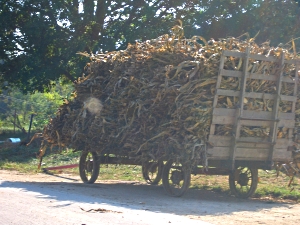 If popular sentiment in KY is more or less the same, the move may turn out to be politically unpopular for the representatives. Though I don’t think this issue would even be on the radar for most Kentuckians, had it not gotten the high-profile coverage that it has. So it may be a “safe” unpopular issue to take up, politically speaking.

For some, the SMV sign is not really even the point.  On last Friday’s post, reader Nancy comments: “This is a fascinating discussion: belief vs safety. Frankly, I am torn…No sign whether it is on the side of the road telling motorist to be cautious, or SMV signs on the back of a buggy has the power to slow some motorists down. Speed, drug, alcohol, texting, chatting on a cell-phone — distracted driving has more to do with accidents, IMHO.”

Either way, there’s a near-zero chance that the Swartzentruber Amish here would decide the SMV triangle is okay after all.  Lance comments: “Whether you agree with either of those religious practices is not part the argument here. The point is the Amish that do not accept SMV signs will NOT change their stance anymore than any other unique religious practice. They would rather all die in accidents or persecution than to change their religion. There simply is no room to compromise as the Amish see nothing to compromise on.”

Katie Troyer wondered why they didn’t simply move to friendlier pastures: “I remember when Amish moved to Nebraska and had trouble over school etc. Rather than fight or cause a big fuss, the moved out of the state.” Apparently they are willing to take their chances in the legal sphere, either in the courts or via legislation.

Working with the law

Amish have a history of working behind-the-scenes with lawmakers. The Amish Steering Committee is a body consisting of Amish leaders which has taken up representation of the Amish in matters having potential impact on Amish nationwide. The Steering Committee has lobbied for allowances in a wide range of issues including alternative wartime service, the wearing of hard hats on job sites, and schooling.

Since this is a much more localized issue–and since Amish differ over the triangle, with the majority accepting it–it seems unlikely the Steering Committee would become involved.

The Steering Committee’s activities notwithstanding, Amish typically shy away from active politicking, a stance informed by Two Kingdoms beliefs.  Highly conservative Swartzentruber Amish seem the least likely to dip their toes into the political sphere, but they’re apparently willing to do so here, and have been getting assistance from the Kentucky ACLU.