You might recall our recent look at the kid box, a special compartment on the backs of some open-top Swiss Amish buggies.  These allow children to ride protected from the weather.  Torey has sent in some further photos of much larger (adult-sized) carriage compartments, taken in the two large Swiss Amish communities in Indiana.

The first photo is from the Allen County settlement: 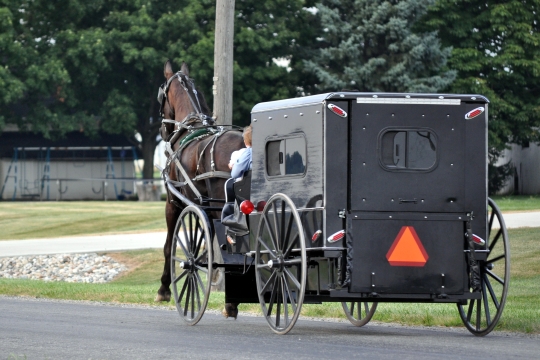 The second was shot in Adams County: 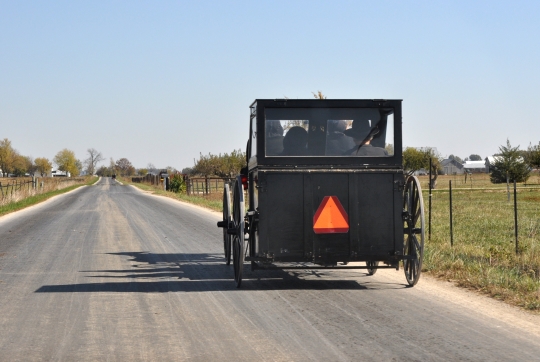 I’ve been hearing a little about this sort of larger covered compartment on Swiss buggies, but don’t know how prevalent it is.  During my last two visits to these two communities (2011 and 2012) I didn’t see any vehicles covered to accommodate adult-sized bodies (other than an unexplained northern-Indiana style buggy in Adams County).  You can see the design of these two buggies is quite different, both from one another, and from other covered Amish buggies (each retains an open seat in the front, for one).

Are these buggies specially permitted for, say, medical situations, or are these communities evolving to permit a characteristically Swiss version of a covered carriage?

In a previous post Linda shared a bit from Lovina Eicher’s (The Amish Cook) April 23, 2012 column, which may give at least a partial explanation.  In that column Lovina wrote: “The community in Berne, Indiana, has open buggies but now several churches are allowing covered buggies.”

Also, a few Swiss settlements have adopted enclosed carriages, according to Steven Nolt and Thomas Meyers writing in Plain Diversity, though they don’t include Adams County in the list, or describe the style of those carriages.