The Language of the Hutterites

What do Hutterites speak? The Anabaptist cousins of the Amish communicate in a German dialect, but it differs from what you hear from the Amish. Manitoba Hutterite Linda Maendel explains her native tongue in today’s post.

Hutterisch – the Mother Tongue of the Hutterites

Hutterisch, as Hutterites fondly call their language, is the Carinthian German dialect spoken by all Hutterites in Canada and the United States and some of the older generation of the Prairieleit (Prairie People). Hutterites live in colonies and the Prairieleit are a group of people that chose not to live communally upon arrival in North America in the late 1800’s. They now live in many different parts of the world.

Carinthia, nestled in the Eastern Alps, where Hutterisch originates from, is a province in southern Austria. There the people, like the Hutterites, speak this unique dialect that is recognized by its ‘Carinthian vowel stretching’. Very often where the High German word has a short vowel, the same word in Hutterisch has a long one.

Something else that’s noteworthy is the fact that there are dialect shifts and various lilts and other interesting nuances from colony to colony. It’s common to recognize what colony people come from, even though you’d never met them, just by the way they speak.

Since Hutterites lived in various European countries, they naturally picked up words that have somehow managed to stay in their day-to-day language. A few such examples are: Swat, which comes from Poland and interestingly there is no English word for. When a couple marries, the father of the bride becomes the Swat of the father of the groom. Tscheiker is the Russian word for killdeer. And Habtschinka is the thanksgiving celebration, also from Russia.

Today, unfortunately we have more and more English creeping into our language. This is understandable, because we do live in an English speaking country. In some cases, we have no Hutterisch words.

For example, farm machinery such as swatter, air seeder. These naturally are bought from a dealer and when they’re brought home the English name comes with it, along with the various parts needed for it. The same can be said for ingredients in the kitchen: Because we always use English cookbooks we constantly use words like vanilla, oregano and many others. That will most likely never change. 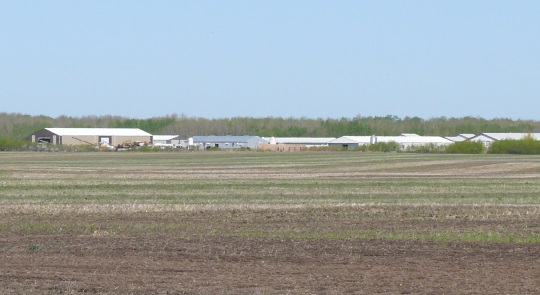 Sadly though, there are areas where we could stick to Hutterisch more and not use so many English phrases. Like Helga Lorenz, an Austrian professor who speaks our dialect says, “You just have to learn to speak Hutterisch more consciously.” Phrases like: ‘I don’t know.’ and ‘Who knows?’ are prime examples where we have no excuse for not saying them in Hutterisch.

Thus Hutterisch is generously sprinkled with English words, phrases and even complete sentences, influenced by the fact that we live in a predominantly English speaking nation. Which begs the question, how long can this continue for us not to lose our mother tongue completely?

For local color, and because I love our language, I’ve included some Hutterisch words in my upcoming book, Hutterite Diaries.

Linda Maendel is a church member and schoolteacher in a Mannitoba Hutterite colony, and author of Hutterite Diaries: Wisdom From My Prairie Community (May 2015).