People often assume that the Amish, whom we think of as a people ‘in tune with nature’ and ‘close to the earth’ (which to some degree may be true, whatever those phrases actually mean) are strictly all-natural when it comes to the food they raise.

In fact, on most Amish farms pesticides are put to use. Organic farming is something that is catching on in certain areas, but it’s definitely a minority share of the Amish-produced milk on the market.  However, those that do take the trouble to go organic are rewarded with higher prices for their milk.  The supposedly healthier-for-you produce finds a slightly different market as well.  This sign is from the Amish community around Geauga County, Ohio. 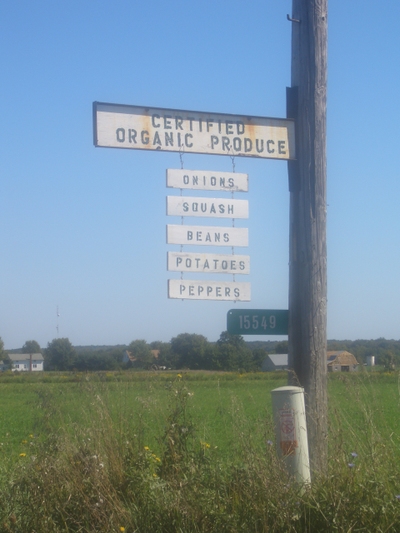 To say that the Amish are into health supplements and alternative treatments would be something of an understatement.  Last time I was in Ohio, one couple I know fairly well was subtly promoting a new one for me, some sort of a pill which I believe contained an entire dried fruit, or at least all the vitamins and good things you’d find in one.

I guess it was a time-saver thing, just pop one and avoid all hassle of eating a run-down-your-chin juicy peach or whatever it might be.  Actually these guys are still into eating regular fruits, I think the idea was more about upping the fruit intake without having to go through two bushels a day (which could potentially wreak major havoc on one’s internals, so to speak).

Whenever I’m around, I usually pick up some sort of health supplements from a furniture maker friend in the same community, who sells them on the side.  Last time it was a Chondroitin-Glucosamine concoction that was supposed to fix up my bum knee.  Well, the bum knee went away as I used it over the summer.  Causality or coincidence, I cannot say.

In the Nappanee, Indiana community, as well as the Daviess County, Indiana community, a couple of Amish acquaintances run prospering health-goods and dietary supplements stores.  The new thing I’ve been seeing in Amish areas lately is Xango juice, a special brew made from the mangosteen fruit, and supposed to contain xanthones–‘next-generation phytonutrients’, with all sorts of intestinal, immune, and anti-oxidant benefits.  The stuff is potent, slickly-marketed, and expensive, at close to 40 bucks a bottle.

This photo, of an Amish Xango dealer’s road-side sign, is also from Geauga County. 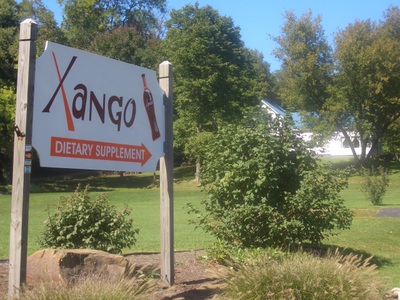 Why are the Amish so into the so-called alternative health market?  There seems to be some truth to the idea that the Amish go for things that tend towards the natural side.  I have detected a belief among some Amish that a lot of what modern medicine has given us to make us better actually may do the opposite.   Not a backwards-thinking mentality–the  typical Amishman when faced with a serious health issue is going to get in the taxi and get to the doctor–but perhaps more a healthy skepticism.  And I’m not one to knock that idea.