Callie Wiser on The Amish: Shunned

Callie Wiser wrote, directed, and produced PBS’ new film The Amish: Shunned, which airs for the first time tonight. Callie has produced other programs for the American Experience series, including two episodes of God in America and 2012’s The Amish. 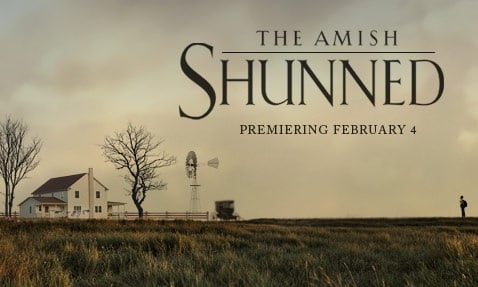 For today’s post, I asked Callie five questions about The Amish: Shunned.  I think she gives some very interesting insight into the filmmaking process and on the former Amish who appear in the film.

You’ll also find a new preview clip at the end of this post.

A special thanks to Callie for taking the time. The Amish: Shunned premieres tonight at 9pm EST on PBS.  If you watch it, I hope you’ll let us know your thoughts here.

5 Questions for Callie Wiser on The Amish: Shunned

Amish America: What challenges did you encounter in making this film?

Callie Wiser, writer/director/producer of The Amish: Shunned: As you pointed out in your first post about The Amish: Shunned, finding a balance was both hugely important and quite difficult. Shunning is a topic rife with emotion and defensiveness, and it is a topic that is pretty easy to sensationalize. I wanted this film to get closer to the true reality of shunning, which is varied and complex. 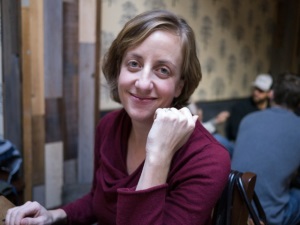 There were a number of questions of balance that weighed heavily on us as we searched for Amish and former Amish voices.

We relied on the diversity of the experiences of our subjects to help us navigate and explore these questions.

How did you find the film’s subjects?  Why do you think they wanted to share their stories?

Callie Wiser: When we started the search for subjects for the films, I knew that I wanted a diversity of experiences, ages and primary reasons for leaving. Diversity is something that we outsiders tend to miss amongst the Amish, and it is easy to simply grab the most outrageous or sensational story and run with it, claiming it represents all Amish.

Working on the first film, David Belton and I spoke with and met a number of Amish and former Amish subjects (many more than appeared in that film), so I knew that different orders of Amish and even different families had different ideas of when and how to shun. I also knew that the passage of time had an effect on the relationships between those who remain Amish and those who leave. When you look at the subjects in this film, you’ll see that diversity represented. 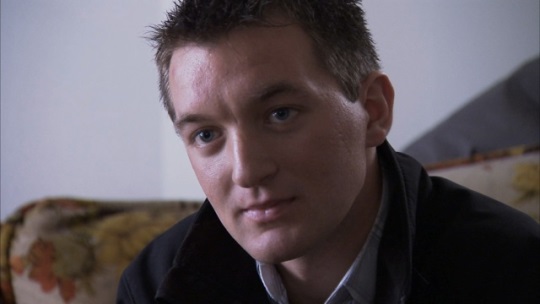 Saloma and Levi, who were in the first program, were naturals for me. I knew there were aspects of their lives we had not presented in the first film, and I knew that Levi’s experience is still in progress and, to me, fascinating to attempt to understand. Though Saloma has dealt with many of her emotions and built a new life for herself in the years since she left the Amish, Anna’s arrival gave Saloma the unique experience of watching a version of her younger self trying to make it in the outside world. I could not have planned that happening, but it strengthened the film to be able to observe Anna seeing our world for the first time.

Joe appears in the first film leading a Bible study that Levi attends, but I went back to him to give voice to those whose primary reason for leaving is questioning the Amish faith.

We found Naomi through the Amish Descendant Scholarship Fund, a scholarship program she and her cousin founded for former Amish who want to go to college. Along with a different reason for leaving, she also brings a less harsh experience. Neither she nor Levi ever joined the church, so neither of them is technically shunned. But their experiences have been completely different. Though Naomi’s story is not the story of someone sneaking out in the middle of the night, and therefore perhaps less exciting to an audience, it is real, and it is representative of the experiences of many former Amish I’ve met. 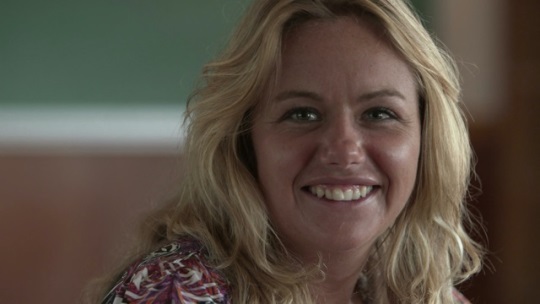 We had come across Jan’s paintings while researching archival material for the first film and were intrigued by the mystery of the origin of the drawings. They were unsigned and had been purchased from an antiques dealer. With the help of an incredibly talented researcher at Elizabethtown College, we identified the likely painter. That researcher, Steve Scott, has since passed away, but he was able to identify Jan as the artist by narrowing down the paintings to having likely been created in a particular region of Ohio in a particular time period based on the particular style of dress depicted in the drawings and a couple of names that appeared on a few paintings (ie Gingerich, Yoder, etc. Not exactly unique names in the Amish community…). It took him less than a day!

We were in touch with Jan and then Paul and felt their story would resonate with those of us who have never been Amish but may have wondered if we could live the Amish life. People often ask me if Amish is simply a lifestyle, and I think Jan and Paul’s experience shows that being Amish is more than simply wearing certain clothes and farming with horses. 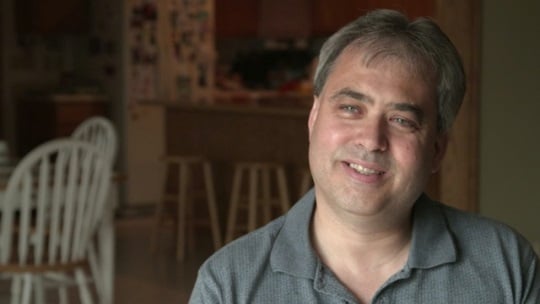 I think people had their own reasons for participating. The presence of reality programming has sown mistrust of the media amongst both Amish and former Amish and may have made a number of the subjects more wary of me and our intentions with this film, but in the end, I think they all trusted that their stories, which most of them see as completely un-sensational, were closer to the reality of life in and outside the Amish community than what we see elsewhere.

It was interesting to hear the comments of Paul, who acknowledged that his family did not really understand Amish life when they joined, but also seemed to suggest the church was heavy-handed in dealing with him.

How much do you think the former Amish you interviewed attribute their current situations to their own choices and how much to other factors (family, church dysfunction, leadership, etc.)?

Callie Wiser: I believe that each person in the film would say that their leaving was based on their own choices. Though a number would likely have very close secondary reasons. And in some cases it is hard to separate those things. 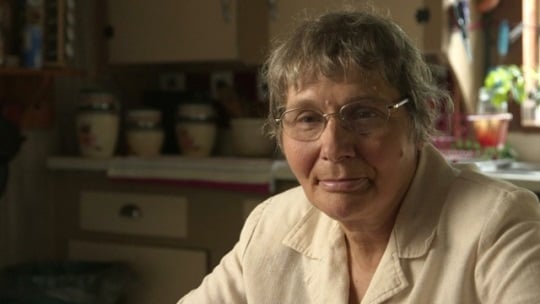 Jan left because she realized that she’d given up too much, but they had also joined one of the most conservative of the conservative groups. They didn’t know at the time that there were other, less conservative, groups of Amish, so perhaps they would have been more able to transition in to a different church community for any number of reasons. (As a side note, I know most of your readers know this, but people are still shocked when I tell them that some Amish don’t have indoor plumbing. I think we are used to seeing the Amish in Lancaster, Pennsylvania, or those near Berlin, Ohio or right around Shipshewana, Indiana since these are the centers of the largest communities and the most touristy areas. Visit a few of the more far-flung communities, and you’ll see a much different Amish lifestyle.)

Saloma had a questioning nature as a very young child and longed to go to school, and I think she would tell you that she likely would never have been able to make it as Amish because of her constant questions. But her family was also dysfunctional. That wasn’t the ultimate reason she left the final time, but her family’s dysfunction and the community’s inability to help her out of that situation were undoubtedly factors in why she couldn’t see herself remaining Amish. 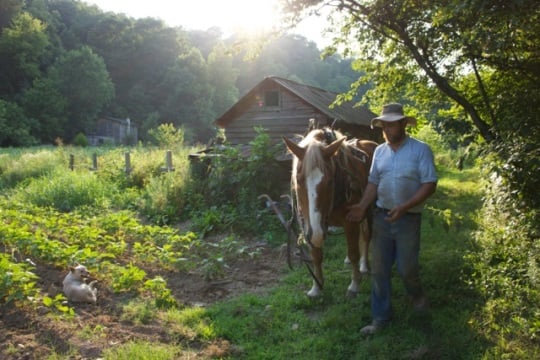 As for Paul, I think he realizes he had become a troublemaker for his community. The Amish I know would have referred to him as a fence-pusher. Some Amish feel that there are people who continually push against the tide and that both the individual and the community may be better off severing ties. Though he says that there was only one charge against him, he also says that the vote was unanimous. He knows that he made choices along the way that brought the community to a place where it would prefer not to have him be a part of it. I don’t know that he would have (or could have) changed any of those choices he made, but I know he wonders what he could have done differently to have a different outcome.

What do you think might surprise viewers about The Amish: Shunned?

Callie Wiser: There are two things I think people might find surprising. First is the emotionality of the film. These are real people dealing with real loss. Not a few sound bites about how great or terrible the Amish are.

A second surprise for many might be that the Amish do not speak English as their first language. Really, they don’t. Though we had a bit of Pennsylvania Dutch in the first program, and we explained in text and with scholar input that Pennsylvania Dutch is the first language of all Amish people, I don’t really think that stuck with a lot of viewers, or at least viewers I’ve spoken with since. 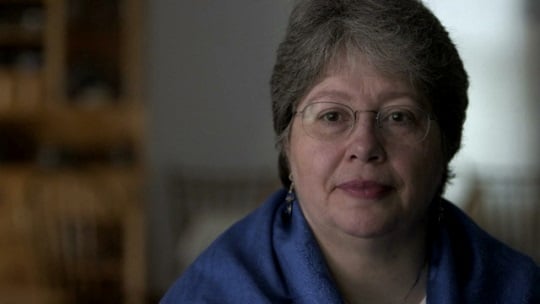 The Amish you hear in the first film speak English, and speak English well. That fluency, coupled perhaps with the fact that many Amish that you and I would come in to contact with if we were to visit Amish country speak English well and know a bit about the outside culture, may lead people to see the Amish like actors in historic Williamsburg, who put on costumes for tourists and then go home, put on sweatpants and speak English. In this film, there is considerably more Pennsylvania Dutch spoken because leaving the Amish culture doesn’t mean you leave your Amishness at the door. It’s a culture, a community and a faith, not simply a lifestyle.

Is there a message or theme that you hope resonates with viewers?

Callie Wiser: The overwhelming request articulated to me when speaking with the Amish and former Amish about both this film and the first film was to present the Amish as human beings. Many Amish feel they are treated as caricatures, either “impossibly good” or “impossibly bad” as David Weaver-Zercher put it in the first film. They feel they are treated as a museum piece—a people who adhere blindly to a list of church regulations—when in reality they are human beings trying to live out a life in accordance with scripture as they understand it.

I hope that viewers will realize that for all our differences, when it comes down to it, the emotions in this film and those surrounding shunning are universal. Don’t we all want the best for our children? Don’t we all want to please our parents?

PBS has released one more preview clip of The Amish: Shunned.  You can now watch the first 9 minutes of the film below, introducing the story of Anna.

You can also read a description of shunning, and one Amishman’s thoughts on shunning from a 2008 interview.  The PBS site for the film, with more details and bonus clips, is here.