Good news for Amish drivers in southern Indiana.  The Amish settlement in Daviess County will be getting buggy lanes on one major road.  The Odon-Cannelburg road runs north-south through the middle of this community.  The road, also known as County Road 900 E,

is a major economic artery with Amish buggies, semi’s, cars, and all types of motorized transportation sharing the road, with sometimes disastrous results. The plans call for construction of 8-foot shoulders for Amish buggy lanes along the road.

The idea for separate lanes was conceived in the 1980s, but is only now coming to fruition.  $2.5 million of Indiana DOT money will make it a reality, with construction starting next year.

Back when they first imagined this, there were a lot fewer Amish in Daviess County.  Today around 4,000 Amish live there, and Daviess County is among the ten largest Amish communities.

I remember driving this road often while selling books in Daviess County some years ago.  It’s blacktop, while many of the roads in the settlement are dirt.  A popular auction house lies just off the road.  How many buggies pass daily down this Amish avenue?  Hundreds?  So it’s nice to see this happening. 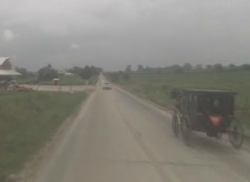 We’ve previously discussed special lanes for horse-and-carriage travel.  Buggy lanes sound like a great idea, but of course are a lot easier to imagine than make reality.  On a past post on buggy safety, reader Debbie Welsh raised the main issues:

What would be ideal, if it were possible, is to make a separate buggy lane over to the side on all of the roads, and not just in Lancaster but wherever there are Amish. That way the Amish would feel safer and alot less stressed, and we in vehicles wouldn’t have to always slow way down or be constantly on the lookout for them. But naturally, that would involve digging into someone’s property, whether private, county, or state owned, and of course the big question – who would pay for it?

Daviess County is much less populated than a place like Lancaster, meaning you wouldn’t have to knock down a lot of houses to get a buggy lane through.  Other Amish communities have buggy lanes running along major roads–for instance, along Route 39 in Holmes County, or State Road 5 in northern Indiana. Any other places you’ve seen them?