There has been some discussion over whether an Amish community exists at Verdigre in Nebraska.  Here’s what I wrote a year ago in the Nebraska Amish state guide:

The Verdigre area (Knox County) was home to another Amish settlement founded by Amish from Michigan in 2003.  The pioneer couple, Eddie and Mattie Petersheim, were profiled in a newspaper article shortly after arriving in Nebraska.  The Petersheims sought land in a less-populated area, as their home community of Marlette, Michigan, had experienced crowding due to its proximity to the city of Detroit.

A number of newspaper articles written about the couple note their unusual occupation of running a restaurant over an hour’s drive from their home.  Other Amish, including relatives, joined the Petersheims in Nebraska.  The Verdigre community survived five years, and was reported extinct in 2008 (Amish Settlements Across America: 2008, David Luthy, p.4).

However, there have been indications of some Amish currently living in the area, either remnants of the original settlement or a new group that started a fresh settlement following the first community’s extinction.

Some have reported, as recently as May, that there are still Amish at Verdigre.  And now Linda shares the following from the Budget, from an ad that appeared on page 37 of the June 13 edition:

A good place to raise your family while farming, ranching or business. We are all well settled and do not wish to relocate. We trust the Lord will send more to join us. 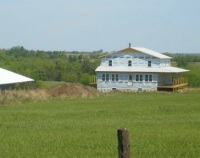 An Amish home going up in Pawnee County, NE

I wish I knew more on the story of this community.  Why were they recorded as extinct a few years ago, though apparently the founding family is still there, along with a couple of others?

“Tractor farming” is an indicator of what’s probably a pretty materially progressive group.  Have they adopted a practice that has left them out of the fold? (in other words, because of some unorthodox custom or belief, are they the only ones that consider themselves “Amish”?)  Was the original report simply in error?  Or perhaps the Petersheims moved away, then returned?  If anyone knows more, would enjoy hearing about it.