Somewhat confusingly, the words “Nebraska Amish” often refer to the “white-topper” group of Pennsylvania and Ohio which bears that name–legacy of an associated bishop and early church members from the Cornhusker State.

Less is heard about the small population of Amish who actually live in Nebraska. Amish America contributor Tom Geist today shares his visits to the handful of communities in the state.

The area of Verdigre in Knox County is home to two separate Amish communities. One of them is a Swartzentruber Amish group, which Tom says has about a dozen families. This sign is from a small home business in the community operated by the Zook family (comments that follow are Tom’s). 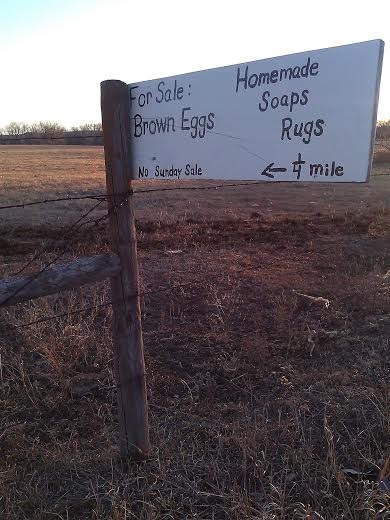 The semi muddy road leading from the main road to the Zooks’ place. Unlike some places I have been in Indiana and Ohio, the back roads for the Nebraska Amish are gravel and sometimes just plain dirt.

The best time to visit is after a little rain, where the moisture holds the clouds of dust down, but not after a huge rain, where you might not make it out of the mud.

A view of a couple of outbuildings. I was told by the man that some of the others were busy moving manure out to the fields, so I parked out of harm’s (smelly) way.

A side view of what appears to be two houses. You can’t see it in this picture but the two houses are joined with a connecting area.

A mini dry good store (not listed on the sign by the main road) was being housed a narrow set of stairs. The woman that took me to it said she had hopes of someday having a bigger, ground level place to work out of, but it all takes time.

I think this depicts some lumber pieces that they make, though I didn’t talk to them about it.

My view as I leave the Zooks’ place.

Tom adds, “In general, pretty much any Amish community I go to now I can find someone that is related to someone else I’ve already met in another community. This helps to make inroads.”

The second Verdigre group has been there longer (2003 vs. 2010) but is smaller, with only four families.  Tom writes that “they have been trying to get more Amish families to come there but Eddie [a church member] tells me lots of Amish do not want to move to a new location unless there is already a church group there.”

A member of the community even took out an ad in The Budget to encourage others to give them a try. Communicating via The Budget and other Amish correspondence newspapers is a long-established technique for attracting others to fledgling settlements.

For one reason or another, sometimes Amish settlements simply do not grow. It seems like it would be discouraging to invest so much time, money and energy in a new community only to have it fail to develop. But it has happened many times throughout Amish history in North America.

We’ve only got one photo from the Orchard Amish community, courtesy of Tom’s dashboard camera. Is it just me or are those tires different sizes? Either way, they look just right for gripping the road.

This settlement landed on the map in 2005. Tom shares that “I can’t find my notes as to how many families belong to their one church district, but I remember that they do meet on the last Friday of each month for a fund raiser/benefit meal. It sounded like some 30-40 attend this.”

He adds that one family operates a small bulk food store. Both Orchard and the village of Ewing are named in the community listing in JAPAS.

In addition to these three groups, there is a community at Pawnee City in Pawnee County (founded 2007). In 2012 there were reportedly around 30 families in the Pawnee settlement.

Tom was also told that there are Amish near the village of Center (also in Knox County, about 10 miles from Verdigre). As of 2013, all Nebraska settlements were just one church district in size.