Michigan currently occupies sixth place when it comes to the size of their Amish population.  The state is home to nearly 12,000 Amish in 3 dozen communities (see Young Center 2011 Amish statistics).

Over one-tenth of the Michigan Amish population is found in St. Joseph County, in a settlement located near the town of Centreville.  This group consisted of 11 Amish church districts as of 2011. This makes the St. Joseph County community over twice as big as the next largest Michigan community.

You can estimate the population here at around 1,500 souls, making it comparable in size to the Ethridge, Tennessee; Seymour, Missouri; or Munfordville, Kentucky Amish settlements. Though the community remains small compared to longer-established settlements in Indiana, Ohio, and Pennsylvania, the Centreville Amish are Michigan’s biggest Amish settlement. It is a well-established group, with farming and numerous businesses operated by Amish found throughout the area.

At over a century in age, the Centreville settlement is one of the older Amish communities in North America. The settlement has an unusual history, with roots coming from two distinct branches of Amish society.

The St. Joseph County/Centreville group is also the oldest Amish settlement in the state, having been founded in 1910.  Though the community is generally not considered a “Swiss Amish” group, the settlement’s history, as told in Michigan Amish Directory 2010 (p.75) reveals deep Swiss roots:

Early in the spring of 1910, the Jacob Schwartz family moved here from Allen County, Indiana.  They had two children, Henry and Lizzie and a son-in-law, Peter P. Schwartz with three daughters, Lizzie, Josephine, and Barbara.  They came by train and settled on a farm 1 1/2 miles southeast of Nottawa.  In April, Peter J. Eicher and famly moved in from Berne, Indiana. 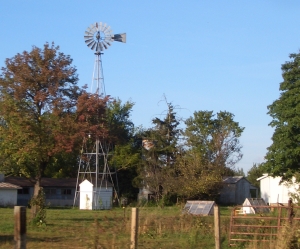 Jacob Schwartz was bishiop here in a church of three families during the first year.   His father had emigrated from France to Allen County, Indiana.  Jacob was the first Amish person and the first Bishop to settle in the Centreville area and also the first to be buried in the Amish Cemetery.  In the following spring (1911), Noah Nussbaum and Christian Stauffer with their families from Berne, Indiana, and Mose and Chris Amstutz and families from Arizona moved to the area.  The next spring, the Sam Wickey and Peter A. Schwartz families from Alpena, Michigan, settled to the east of Nottawa.   With others of the Swiss people following, the Schwartz church kept increasing in size.

Soon after, Amish from non-Swiss communities began moving into the area in larger numbers, from states such as Indiana, Kansas, Missouri, and Oklahoma.  The community has become a mix of descendants from both the Swiss Amish and Pennsylvania German Amish groups.

The Centreville Amish area is quite rural and rather wooded, with numerous farms and Amish shops scattered among non-Amish residences, along with quite a few roads on which you seem to find only Amish home after Amish home.  I arrived for a brief visit near the end of a mid-August day, with the sun dropping and shadows getting long.  It was a perfect time to visit as you can see by some of the photos on this page.  The town of Centreville, the seat of St. Joseph County, is a bit over 1,500 people, a size which is generally friendly to buggy travel. 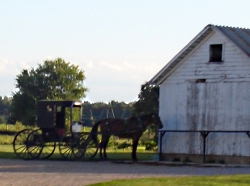 The St. Joseph County community maintains ties with the Amish just over the state line in Elkhart and Lagrange Counties in Indiana.  Local men travel south for work–most often to the region’s RV factories–while some young women do the same (Karen Johnson-Weiner describes the two communities’ educational connections, with Amish girls working as teachers in the much larger settlement to the south).  The Centreville Amish group has had ties with this community from its earliest days, and which it maintains today.

As with the Elkhart-Lagrange community, working in Indiana’s factories has also brought Centreville Amish in some sense closer to “the world”.  Here’s a bit more on that from our Michigan Amish state guide:

With increasing ties to the world has also come increasing technological change.  Karen Johnson-Weiner notes this change in Train Up a Child: Old Order Amish and Mennonite Schools.  Amish in the Centreville community have accepted phones to a greater degree, allowing them in phone booths and in some businesses.  Additionally, bicycles have been allowed in some church districts, as well as rubber tires on large wagons.

Cutting it up at an Amish sawmill

Though I only had a short while, and missed visiting most Amish businesses as it was late in the day,  I did have quite a nice conversation with a local sawmill owner, who gave me a look inside his trade.  As he guided me through the mill we examined his cutting equipment, fearsome machines now lying dormant, awaiting the next workday to kick back into life.

I always get a little edgy around sawmill machinery, given the ferocious noise and brutal force they’re capable of producing.  I found myself wondering…could I hack it–no pun intended–on this Amishman’s workforce?  I figured I’d probably be missing a few digits–and I might be lucky if that were all–in short time.  I spent a moment envisioning myself tripping over a scrap of wood or getting a shirt sleeve snagged in the gearworks, and shuddered…The sawmill is not the place to be sloppy at work.

Sawmills and other Amish businesses have supplemented, and even replaced farming in St. Joseph County

The St. Joseph County Amish are not the most progressive but are certainly not the most conservative when it comes to technology (and they’re certainly less conservative than the Swartzentruber Amish in Branch County, MI, a short hop-skip to the east), and the Amishman’s relatively high-tech machinery reflected this.  As we walked behind his sawmill I gazed at the large stockpiles of cherry, walnut, and other woods, heaps of enormous tree trunks shorn of their branches, waiting for further cleaving upon their turn at the blade.

Viewed from one end, the inner core and rings exposed, you could see the growth years of each tree’s journey on this earth–a journey which currently had them waiting here in the Amishman’s mill yard, only a brief stop on the way to the next destination. Much of the resulting lumber was pegged for export to Asian markets, reminding us that it’s a wide-open world nowadays, even in “Amish country”.

In addition to sawmills and farms, the Centreville community has a wide range of small businesses, obvious while driving through the area.  The Michigan Amish directory lists some of the locals’ occupations:  auctioneer, archery, salvage grocery, carpentry, woodworking, harness, health/healing care, engine repair, apiary (that’d have something to do with bees folks, not hominids. Ha-ha) teaching, welding, seamstress, chiropractic.

Playhouses and other children's items for sale

Judging by the directory I’d estimate between 1/3 and 1/2 of household heads do at least some factory work (either part or full-time, with part-timers combining factory jobs with farming, carpentry work, or a small business), showing the importance of the RV industry here as well. 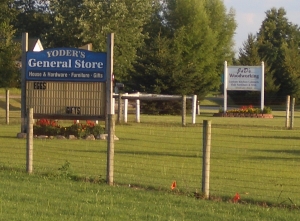 The Centreville Amish community is home to numerous businesses

Amish tourism is also alive in the area, with a number of outlets offering places to spend money and a pleasant time.  There is an “Amish Meandering” tour which takes in a meal at a local Amish home, as well as a variety of shops, such as Yoder’s Country Market and Miller’s Discount Store catering to visitors (more on MI Amish tourism/businesses).

Towards the end of his Centreville history in the Michigan Amish Directory, quoted above, the writer shares a reflection.  I think these words would be apt for most communities:

This is the year 2010, 100  years after the first Amish settlers founded the community in Centreville, MI.  It is sobering to think that the Lord still has patience with us.  Will it continue for another 100 years?  In looking back over the years a lot of history could be written down of the happenings, the decisions our forefathers made, their shortcomings, etc.  But let us not dwell too much on their shortcomings as we all have these.  But we can still take a lesson and a warning from their mistakes, the same as the incidents written in the Bible.

I hope you enjoyed this brief look at Michigan’s largest Amish community.  Has anyone else visited this settlement?